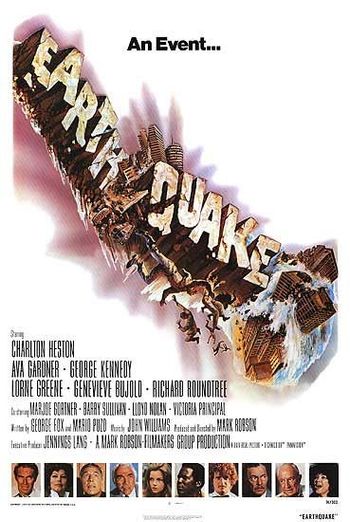 Stewart Graff (Heston) is a construction engineer stuck in a forlorn marriage to Remy Royce-Graff (Gardner). Denise Marshall (Bujold) is the widow of a friend of Stewart's whom he has an affair with. Sgt. Lew Slade (Kennedy) is a disgruntled cop. Miles Quade (Roundtree) is a motorcycle stuntman who is preparing for the biggest stunt of his life with his partner Sal Amici (Gabriel Dell). Rosa Amici (Principal) is Sal's sister. Jody Joad (Gortner) is a National Guardsman with a day job as a store clerk who is on the verge of a psychotic breakdown. Amidst all these characters and all this drama, however, the California Seismological Institute has calculated that Los Angeles is going to be hit by a massive earthquake, the worst ever recorded, in the next day or two. Walter Russell (Kip Niven), the amateur staffer of the Institute who discerned this, proposes that the city be evacuated, but his superior insists that the cost of evacuation could be even greater than that of the earthquake itself. Can you guess where this is all heading?

The film was originally written by Mario Puzo, of The Godfather fame. He dropped out from production due to contractual obligations to work on The Godfather: Part II. The script collected dust for a time until Universal Studios thought they could make a buck off of it due to the success of Airport and The Poseidon Adventure. In order to draw audiences in, screenings of the film used a technique called "Sensurround", in which loud speakers simulated an earthquake within the cinema. Despite lukewarm reviews at best, Universal Studios's predictions were correct and the film was a rollicking financial success, grossing $79 million whereas its budget had been a mere $7 million. (Adjusted for inflation in 2021, the budget amounts to $38 million and the gross $431 million.)