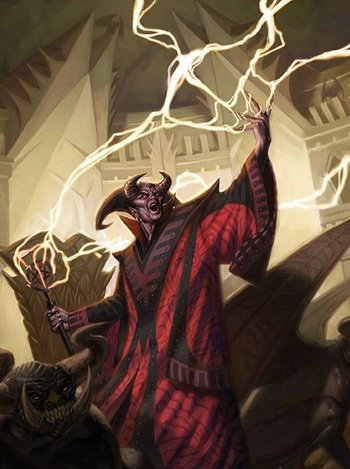 Javier: Why don't they fight their own fucking fights!
Vendel: Would you be eager to fight the devil?... [f]or that is what Gunmar is to trolls — the devil, who can strip the will and mind from your closest, oldest, friend or mate, and send them against you.
— Coming Back, Broken

A truly evil character who appears to be a satanic figure for the setting, although they clearly aren't the Devil himself.

A Satanic Archetype character can be any combination of the following:

Chances are, if a work is using

Everybody Hates Hades, then Hades or another being or creature associated with death will be depicted as a Satanic Archetype. If the character lampshades their satanic qualities, then it falls under Devil Complex.

Super-Trope of Davy Jones. See also The Trickster, Hijacked by Jesus, God of Evil, The Anti-God, and Louis Cypher (a trope which frequently overlaps with this one). Contrast with Crystal Dragon Jesus, Madonna Archetype, Messianic Archetype and Big Red Devil (who looks Satanic but doesn't necessarily act the part). Tends to share traits with the King Koopa Copy.