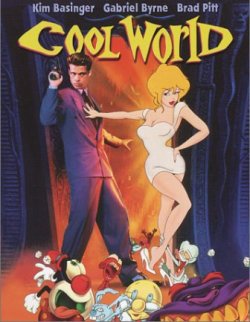 Welcome to the animated Dark City. Hope you enjoy your stay!
"Around here, anything goes. Anything goes except one thing...Noids do not have sex with Doodles!"
— Frank Harris
Advertisement:

A 1992 movie by Ralph Bakshi where a cartoonist finds himself in the animated world he created, and is seduced by one of his characters, a comic strip vixen who wants to be real. Cool World marked Bakshi's return to feature films after nine years. The film was originally pitched as an animated horror film about an underground cartoonist who fathers an illegitimate half-real/half-cartoon daughter who hates herself for what she is and tries to kill him.

The plot itself (if you could call it that, after all that Executive Meddling) opens with Frank Harris (Brad Pitt), a World War II veteran who finds himself transported to the titular place, a strange alternate universe inhabited by cartoon "Doodles", following the death of his mother in a motorcycle accident. There, he becomes a police officer tasked with enforcing the Cool World's single law: Noids (real people) do not have sex with Doodles (cartoons). This causes him no small amount of torment, as he has fallen in love with a Doodle girl named Lonette.

Years later, a disturbed comics artist named Jack Deebs (Gabriel Byrne) murders his wife's lover in a fit of passion, and as a result is sent to prison. For escape (of the mental, not physical, type), Jack draws a comic book based on the dreams he is continually having of the Cool World and a voluptuous vixen named Holli Would (Kim Basinger). We first meet Jack when he is being released from prison upon the successful completion of his sentence. Through means that are never adequately explained, Holli manages to pull Jack into the Cool World and seduce him, her goal being to become a Noid and be able to experience the pleasures real people enjoy. Having broken the Cool World's law, however, Jack and Holli start a chain of events that could result in the destruction of the world. It falls on Frank's shoulders to face his devils, return to reality, and save the day.

Contrast Who Framed Roger Rabbit which is Lighter and Softer and involves more notable Toons. Not to be confused with Shirley Clarke's movie about young Harlem gangbangers, The Cool World.

As Nails mourns over Frank's death, he looks very adorable when he cries.

As Nails mourns over Frank's death, he looks very adorable when he cries.