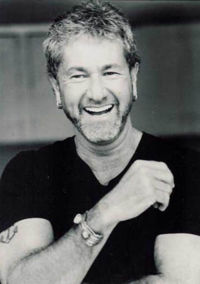 Hello! It's me, Charlie Adler...
Advertisement:

Hiya, toonsters! We got a great show for you today!

Silence! Only I can give this puny human a proper introduction.

Charles Michael "Charlie" Adler (born October 2, 1956, in Boston, Massachusetts) is an American voice actor and voice director. He's voiced a ton of characters over the years

, most notably as the original voice for Buster Bunny from Tiny Toon Adventures, and about half the cast for Cartoon Network's Cow and Chicken and spinoff I Am Weasel. He's also been the voice of Starscreamnote Originally voiced by Chris Latta in the original G1 animated series. in the Transformers movies.

He's also gotten into voice-directing: he's voice directed The Rugrats Movie Rugrats in Paris. The Wild Thornberrys; Rugrats the series; the cast of One Hundred Deeds For Eddie Mc Dowd; Rocket Power, The Brothers Flub and the pilot for As Told by Ginger.

As an actor, Charlie Adler starred on Broadway in Torch Song Trilogy as a successor to Harvey Fierstein. He also toured in the first national company, for which he earned a Helen Hayes Award best actor nomination. Off-Broadway, Charlie starred in Family Business at the Astor Place Theater for a year, as well as appearing in Alan Albert's acclaimed improv company, The Proposition. Adler co-starred with Imogene Coca and Rita Rudner in Once Upon a Mattress, with Professor Irwin Corey in Neil Simon's Gods Favorite, and toured as Edward Albee's psycho in Zoo Story. In addition, he has played Israel Horowitz's Hero in Dr Zero as well as the Emcee in Cabaret.

He was also the director, writer, and star of the independent live-action short film No Prom For Cindy, a teen dramedy about a high school girl, played by the then-middle-aged, muscular Mr. Adler with no attempts to make him look like a girl aside from being dressed like one, and no one in-story noticing or caring that "Cindy" is a man. In the film, Cindy tries to make sense of her sexuality after kissing her best female friend during a slumber party, refusing to make out with a boy who asked her to the prom, and being sent to a religious-based corrective therapy program by her intolerant parents.

In live-action TV, Charlie was a regular on the very short-lived The Redd Foxx Show, assumed the roles of three generations of sons for PBS in Then And Now, and played an obsessive photographer in HBO's First And Ten, as well as over 100 commercials. As a writer, Charlie has co-written several Tiny Toon Adventures episodes, and his critically acclaimed one-man show There Used To Be Fireflies won him a Dramalogue Award For Best Actor. E!, Entertainment Tonight, TV Guide, PBS, The Los Angeles Times, and The New York Daily Post have profiled him. He's been a guest on The Joan Rivers Show and in 1991 Charlie was one of hundreds of guests invited by Barbara Bush to a White House reception in honor of their contributions to the First Lady's literacy program.

Tropes applicable to him include: