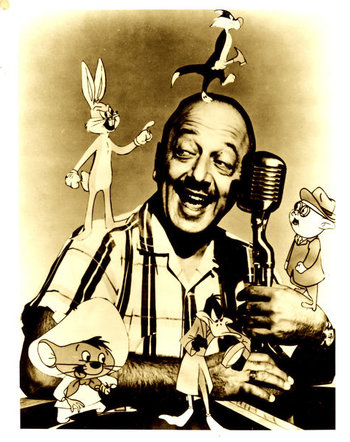 Melvin Jerome "Mel" Blanc (May 30, 1908 — July 10, 1989),note His surname was originally Blank, but he changed the spelling after a teacher made the obvious mean-spirited pun about the name a.k.a. the original "Man of a Thousand Voices", was one of the most prolific voice actors of all time, as well as one of the best, starting in The Golden Age of Animation and working up until his death in 1989, right at the beginning of The Renaissance Age of Animation.

Born in San Francisco and raised in Portland, Blanc got his start on local Portland radio after high school, before moving to Hollywood in 1935. After getting work in commercials and radio, Blanc decided he wanted to voice cartoons too. For two years straight he would make a biweekly trip to the Leon Schlesinger studios — who produced cartoons for Warner Bros. in the late 1930s only to be rebuffed by the head of the sound effects department, who thought they didn't need any more voice actors and couldn't even be bothered to listen to Mel. He would die soon after, and his replacement Treg Brown did agree to hear Mel. He was impressed and had him perform in front of the directors. They too were impressed and then one of them asked Mel if he could do a voice for a drunken bull — Mel did it and he was hired on the spot, and the rest is history.

Blanc is most notable for voicing most of the cast of Looney Tunes (among other cartoons), which frequently saw him Talking to Himself. What's amazing is that most people probably wouldn't be able to tell that most, if not all, of the characters in each Looney Tunes short were being done by the same guy (Leonard Maltin once put his talent into perspective by marveling that Tweety Bird and Yosemite Sam were the same man). He was that good. It even got to the point that his knack for doing many voices was lampshaded in the Porky Pig short Curtain Razor. He was also one of the only voice actors in his day to ever get a credit for his work in any theatrical shorts (which led to a variant of Misattributed Song when voices done by Daws Butler, Stan Freberg, or Arthur Q. Bryan were also assumed to be Blanc). It ought to also be remembered that Blanc essentially won voice actors the honor of being credited cast members. He had become so indispensable to Leon Schlesinger's studio that the only way the cheapskate could avoid giving into Blanc's demands for a raise was to guarantee him sole on-screen credit as a voice actor, which gave Blanc the notability to be sought after by name. Later, other voice actors followed suit, and within a few years, it was unthinkable to not credit a voice actor.

Blanc's work was not just limited to cartoons; when he wasn't recording the voice of Bugs Bunny he could be found working on many classic radio programs — like the Happy Postman on The Burns and Allen Show. But his most famous radio work was on The Jack Benny Program where he played dozens of characters — Jack's long-suffering violin teacher Professor LeBlanc, Jack's Maxwell car, amongst others. At the height of Mel's popularity brought on by now having screen credit for his cartoon work, he was given his own show on CBS, The Mel Blanc Show where he played himself as the fumbling owner of a fix-it shop. Sadly the program didn't play to Mel's comic strengths by having him play the straight man and it only lasted one season.

His wide range of work gave him the cool nickname, "The Man of a Thousand Voices", hence he is the Trope Namer (it should be noted that this is an exaggeration; he admitted in his autobiography that he'd done around 850 voices which is still very high, but not quite 1000). Despite his propensity for driving a hard bargain, especially later in his career, he was known for being affable and easy to work with once was actually in the studio. He had a fair amount of respect for his contemporary – and the only other Looney Tunes actor to regularly receive a screen credit – June Foray (though Chuck Jones held Foray in higher esteem and never hesitated to say so). Unfortunately, Blanc was also a heavy smoker and that addiction later affected his voice to a noticeable degree by the late years of his career. It didn't ruin Blanc's voice completely, but some clips used in at least one TV special had to have Blanc rerecording the soundtrack to fit, another reason why Smoking Is Not Cool.

Mel was notable for his refusal to do imitations as he believed it to be disrespectful to be "stealing" another's person's voice — he was very reluctant to take over the voice of Elmer Fudd after Arthur Q. Bryan passed away, but did so since no other suitable replacement could be found (which is why Elmer is not on the "Speechless" Lithograph). When he was cast as Barney Rubble for The Flintstones he rebuffed Hanna-Barbera's request for him to imitate Ed Norton, what he gave them was a voice similar to Norton's but not an exact imitation.

Mel was also a Friend to All Children, gladly calling kids on their birthday in their characters' favorite voice, and his house would be the most popular on Halloween. He was also a Shriner and would lend his talents for ads to raise money for their children's hospitals. In his later years, he and his son Noel formed Mel Blanc Associates, an advertising agency and would give lectures on voicing acting.

Blanc was still recording lines for cartoons from his hospital bed mere days before his death in 1989,note He died one day before another master from another end of the acting spectrum, Laurence Olivier when he fell out of a hospital bed without guardrails (though Blanc aficionados would just as soon credit exhaustion). To this day, few, if any, voice actors can match his range. Warner Bros. currently requires a regular cast of voice actors to cover what was once done by one person.

Oh, yeah, this is his tombstone

◊ lithograph was also made following his death.

Needless to say, Blanc is a legend among voice actors and fans. His voice work is considered the milestone that marks the Golden Age of animated comedy, and his characters' catchphrases are still remembered nearly a half-century later. In the years since his death, his roles were inherited by not one, but a whole cast-list of rotating voice actors; basically, the voice actor of characters like Bugs Bunny in one Looney Tunes production often doesn't reprise the role in another. For example, each film in the franchise has had different voice actors for Bugs Bunny (Billy West in Space Jam, Joe Alaskey in Looney Tunes: Back in Action, and Jeff Bergman in Space Jam: A New Legacy) and Daffy Duck (Dee Bradley Baker in Space Jam, Joe Alaskey in Back in Action, and Eric Bauza in A New Legacy). It should be noted that an important reason Warner Bros. employs so many people to do Mel's roles today is simply to prevent any one person from having enough clout or star power to demand a high fee as Mel did in his last years.