The new logo introduced in 2019. “We are Warner Records: Born in the California sun, at home everywhere on Earth.” 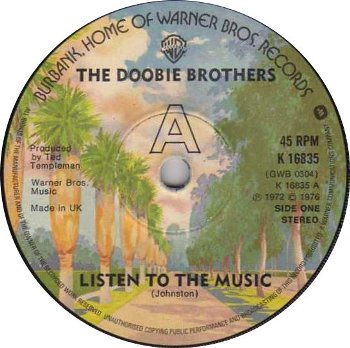 The mid-70s "Burbank label". The street doesn't exist, at least not in Burbank; the painting was inspired by art from a 1920s orange crate.
"Whenever a mystique forms around a corporation, as it has with Apple or Microsoft, and as it did around Warner/Reprise, I always think it's excessive, because it's still a corporation. And when you dealt with Warners on business, you may as well have been dealing with a mortgage broker. They were tough. Mo [Ostin], Joe Smith, whomever you dealt with. Though not on record budgets — I never heard that I couldn't use an orchestra, for instance. The main thing about the label, though, is that they gave you the chance to fail. They put up with you if what you were doing was good in, let's say, an aesthetic way. There was no A&R department that passed judgment. If it felt like somebody was doing something — they'd let you fail, and fail again, and fail again. And fail forever. Like me, and [Ry] Cooder, and Bonnie [Raitt], for a time. Now that's gone. You can't find it. And that's a very big thing."
—Randy Newman on his old employer
Advertisement:

Warner Bros. Records, now known as Warner Records, began in 1958 as an offshoot of the film studio. Like many of its artists, it was given "the chance to fail" until it emerged not only as a successful label, but a major force in the music industry.

Warners had dabbled in the record business as early as the late 1920s, when the company bought Brunswick Records and several music publishers. Like the rest of the record industry, Brunswick suffered due to both The Great Depression and the introduction of broadcast radio, so WB sold the label in 1931. Warners stayed out of music, licensing film soundtrack albums (and Mel Blanc's Looney Tunes discs) to other labels, for the next 27 years.

By the late 1950s, the film industry was in decline thanks to TV and other factors. Meanwhile, the music industry was on an upswing, and movie studios were taking advantage of it. MGM Records had been successful for years; Paramount had just bought Dot Records; United Artists Records, 20th Century Fox Records, and Columbia Pictures' Colpix label (one of the corporate ancestors of Arista Records) were entering the fray; even Disney had a small pop label, Buena Vista, and way-past-its-prime RKO Pictures had a short-lived attempt with the RKO Unique label. (Universal reversed the pattern — they were owned by a record company, US Decca.) note (It's interesting to note that the movie studios' then-arch-enemies, the TV networks, were also involved, with RCA owning both NBC and RCA Victor, CBS owning Columbia Records, and ABC having recently started their ABC-Paramount label.) The final impetus was provided by Tab Hunter, a Warners contract player who moved into music and had several hit singles — for Dot. After a failed attempt to buy the Imperial label, WB took the plunge; on 19 March 1958, Warner Bros. Records opened for business.

The label's formative years provided a lot of Early Installment Weirdness. Besides the expected soundtrack LPs, there were stereo demonstration records, Concept Albums with titles like Terribly Sophisticated Songs (A Collection Of Unpopular Songs For Popular People), and musical excursions by actors like Dragnet creator/star Jack Webb, who released an album where he recited love songs in his Sgt. Friday monotone. In addition, many of the early releases on the label were by Warner Bros. contract actors; whether they could sing or not was beside the point. Space Age Jazz and Easy Listening ruled, and Rock & Roll was almost non-existent. Unsurprisingly, only a handful of WB's releases charted. The few hits it managed were tied to the studio's popular TV series 77 Sunset Strip; the soundtrack album sold well, and actor Edd Byrnes (who played the show's Breakout Character Kookie) had a fluke novelty hit with "Kookie, Kookie (Lend Me Your Comb)". Still, the successes were far outweighed by the failures. Warner Bros. Records was losing money, and the company was almost shut down — but fortunately, it was given one more chance to fail. And as with society in general, The '60s changed everything.

Warner Bros.' salvation began with another group of siblings — The Everly Brothers, who had been consistent hitmakers for the independent Cadence label. Warners wooed them away with an unprecedented million-dollar contract in 1960, and while the hits dried up after a while, the Everlys sold well enough to stay on the label for years afterward. WB's next major act was Bob Newhart, whose chart-topping debut album established Warner Bros. as the label for Recorded and Stand-Up Comedy for decades to come. The next big signing was Folk Music trio Peter, Paul and Mary, whose numerous hits included "Puff the Magic Dragon".

In 1963, Warners bought Frank Sinatra's struggling indie label Reprise Records, just in time for Ol' Blue Eyes to begin a Career Resurrection. A few years later, Reprise manager Mo Ostin helped bring both labels into the Psychedelic Rock era by signing Jimi Hendrix to Sinatra's imprint. The Grateful Dead were already part of the Warner Bros. stable, and these two acts became the wave of Warners' future, attracting the new generation of Rock musicians with their combination of artistic credibility and high sales. Around this time, WB started releasing its "Loss Leaders", a popular set of label samplers with detailed liner notes (often by Barry "Dr. Demento" Hansen) that were sold through the mail for a dollar a disc. The company also developed a reputation for clever, witty advertising, although punk-era imprints like Stiff and Sub Pop took this even further.

By The '70s, Warners had become one of the biggest labels in the music business, with a diverse roster ranging from soft rock performers like James Taylor and America to Heavy Metal bands like Black Sabbath and Deep Purple. It also became part of WEA Records (now Warner Music Group), an entity formed when Warners' corporate parent bought two more record labels, Elektra and Atlantic. The company purchased half of reissue label Rhino Records in 1992, acquiring the other half of the company in 1998. While the founders of Rhino later departed to found Shout! Factory in 2003, Rhino handles reissues of catalog titles from Warner and its subsidiary labels.

Warner's artist-friendly ethos would continue into the '80s as it and other WMG-owned labels would become outlets for Alternative Rock as it was getting mainstream recognition, with the signing of bands such as Hüsker Dü, The Flaming Lips, Jane's Addiction, the Red Hot Chili Peppers, and R.E.M., and securing U.S. distribution deals with British bands like New Order (on Quincy Jones' Qwest imprint) and The Jesus and Mary Chain throughout the decade. Warner's signing on R.E.M. was particularly notable, as they were the only label to guarantee total creative control for the band, something the Georgia quartet adamantly prioritized. Despite this, Warner would also see its artist-friendly reputation decline considerably over the decades, as the likes of Frank Zappa in the 70's, Devo in the 80's, and especially Prince in the 90's publicly and relentlessly mocked the label's more restrictive practices. Retrospective analysis of Warner generally leans towards characterizing the label as subject to a dichotomy of being willing to take risks with less commercially viable artists while simultaneously getting cold feet if those risks look like they'll stop paying off.

Today, the company remains an industry leader, despite the decline of record labels in general and the loss of key executives and artists during corporate shakeups in the 2000s. After Time Warner sold Warner Music Group in 2004, Warner Bros. Records was no longer under the same corporate umbrella as the Warner Bros. film studio, but it still had a 15 year royalty-free license to use the name and trademarks, including the WB shield. When the license expired in May 2019, the label rebranded as "Warner Records," swapping out the old Warner Bros. iconography with a minimalist sunset logo, similar to how United Artists Records changed its name back to Liberty Records after being purchased by EMI, to much derision from music fans. (The movie studio now uses WaterTower Music, the former New Line Records, for soundtrack releases. This label happens to be distributed by Warner Music.)

Like its then parent company, the label was known as Warner Bros.-Seven Arts Records between 1967 and 1970.