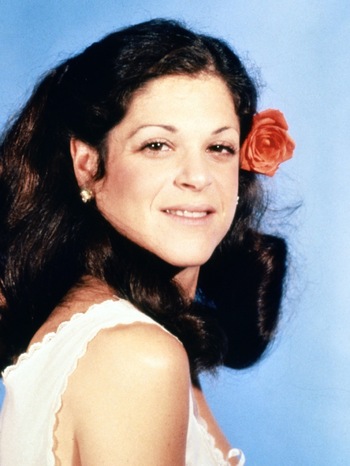 Gilda: I haven't been on television for a while.
Garry: Oh that – yeah, what was wrong?
Gilda: (matter-of-factly) Oh, I had cancer. (Beat) What did you have?
— Gilda's last TV appearance, It's Garry Shandling's Show
Advertisement:

Gilda Susan Radner (June 28, 1946 – May 20, 1989) was an American actress and comedian, best known as one of the original cast members (often referred to as the Not Ready for Prime Time Players) of Saturday Night Live, on which she played such characters as obnoxious news correspondent Roseanne Roseannadanna, hard of hearing Emily Litella, nerdy Lisa Loopner, and "Baba Wawa" (a parody of Barbara Walters). Shortly before she left SNL, Lorne Michaels directed her in a one-woman show on Broadway, Gilda Radner: Live from New York, a performance of which was captured on camera by Mike Nichols and released as the 1980 film Gilda Live.

In the 1980s, Radner left television behind to focus on her film career. She met Gene Wilder on the set of Hanky Panky in 1981, and although she was married to future SNL guitarist G. E. Smith at the time, she would state in her autobiography It's Always Something that meeting Wilder was "love at first sight". She subsequently divorced Smith and married Wilder. The couple would appear together in two more films, The Woman in Red and Haunted Honeymoon, before Radner's death from ovarian cancer at age 42. Her death led to the founding of Gilda's Club, an organization for those living with cancer and their families.

She was posthumously awarded a star on the Hollywood Walk of Fame in 2003 and many female comics and SNL cast members continue to cite her as an inspiration to them.

A documentary about her, Love, Gilda