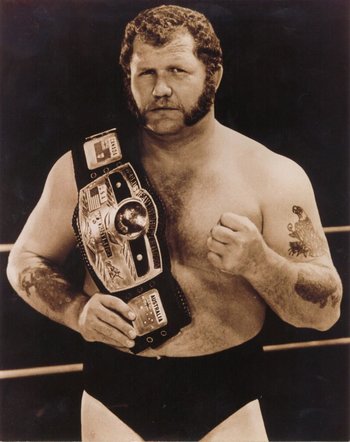 During one of his eight reigns as NWA World Heavyweight Champion
Advertisement:

from 1973 to 1984. He started in Missouri as a teenager before moving to Memphis and wrestling under the name Jack Long and teaming with his "brother" John Long. Over time, he competed for, obviously, many National Wrestling Alliance territories, for the American Wrestling Association, for Stampede Wrestling, and for All Japan Pro Wrestling, before he started winding down his career in WWE in the late 1980s. He retired from active competition in 1991 and became a manager in WCW, most famously for Lex Luger, and, especially, Big Van Vader. He was also the promoter of World League Wrestling in Missouri. He was inducted into the Wrestling Observer Newsletter Hall of Fame in 1996 and into the WWE Hall of Fame in 2004. He is also on the list of wrestlers who had slammed André the Giant prior to Hulk Hogan doing it at WrestleMania III. He passed away at age 76 from lung cancer.