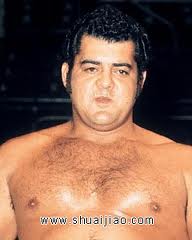 "He just beat Charlie Brown
Smashed his face to the ground
Won't stop 'till he has the belt"
— The Mighty Ions, "Pedro Morales", made to the tune of Dead Kennedys' "California Über Alles"
Advertisement:

Pedro Morales (October 22, 1942 – February 12, 2019) was a Puerto Rican professional wrestler who competed from the 1950s into 1987. He is best known for his work in WWE, where he was the fourth WWE World Heavyweight Champion

twice (first person to do that, in fact) and the WWE World Tag Team Title

once with Bob Backlund. In 1972, Pro Wrestling Illustrated named him "Wrestler of the Year." In 1995, he was inducted into the WWE Hall of Fame.