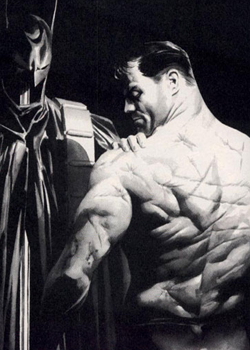 All of those little scrapes and bruises have a way of really adding up.
Alfred: Know your limits, Master Wayne.
Bruce: Batman has no limits.
Alfred: Well, you do, sir.
— The Dark Knight
Advertisement:

What happens when you get enough injuries, even if you appear to be Made of Iron. Usually showcased by having a Made of Iron hero trudge into their headquarters after an action scene (one that more often than not establishes how much punishment the hero can give and receive) only to have them shuffle off their uniform and reveal the various injuries and strain on their joints that a life of adventure would realistically lead to. Typically done to show the hero even more of a Determinator than first thought since they're still out doing what they do despite looking like they should be in a hospital.

Often the fate for a hero who pushes himself into Heroic RRoD mode on a regular basis.