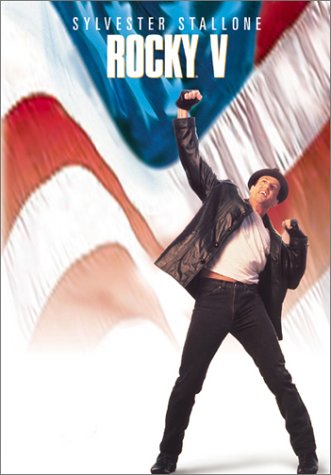 "I'll get it all back. We just gotta stick together, hey?"
George Washington Duke: In the ring! In the ring! Tommy Gunn only fights in the ring!
Rocky: My ring's outside.
Advertisement:

The one where Rocky goes all Street Fighter in the end.

Rocky V is a 1990 American sports drama film written by and starring Sylvester Stallone; the fifth film in the Rocky series.

Rocky has fallen on hard times due to combination of suffering from brain damage after his bout with Drago in the previous film and having his fortune stolen by a crooked accountant. He is forced to move back to his old neighborhood, where he starts running the late Mickey's gym. He becomes a trainer to a young boxer named Tommy Gunn. This doesn't sit well with his son and their relationship starts to deteriorate.

Though this was presumed to be the end of the series, Sylvester Stallone made a sixth film, Rocky Balboa, which was released in 2006.