Dig Your Own Grave 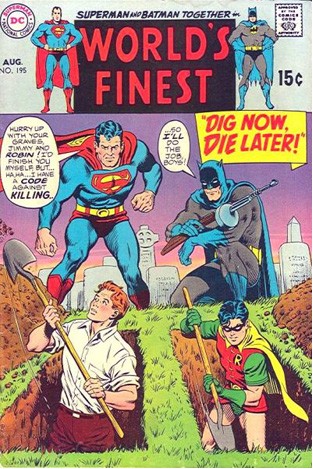 Doesn't Batman have a code against killing too? And guns?
Beatrice: Why do they even have you digging these holes?
Wirt: Planting seeds, or something.
Beatrice: Maybe they're gonna bury you out here!
Wirt: Pfft.
Greg: Hey! Buried treasure!
Wirt: Wow, really? (to Beatrice) See, Beatrice? (to Greg) What'd you find?
Greg: A skeleton!
— Over the Garden Wall, "Chapter 2: Hard Times at the Huskin' Bee"
Advertisement:

When a character must literally dig a hole for their body, usually being forced to as the last thing they do before being killed or even Buried Alive.

In these situations, since the character is going to die anyway, one might wonder why the character doesn’t outright refuse this indignity. Usually the reasoning is that the prisoner goes along with it because they want to eke out as much time for their life as possible. And, at least in fiction, this is often what saves the character. Much like an elaborate Death Trap, it gives the digger time to think of an escape plan, or their allies time to save them. Or, unless they are being forced to dig with their bare hands, they may figure this is a chance for their enemies to hand them a plausible weapon.

Not to be confused with the figurative meaning of "digging your own grave"; for that, see Open Mouth, Insert Foot; Not Helping Your Case; and Digging Yourself Deeper.