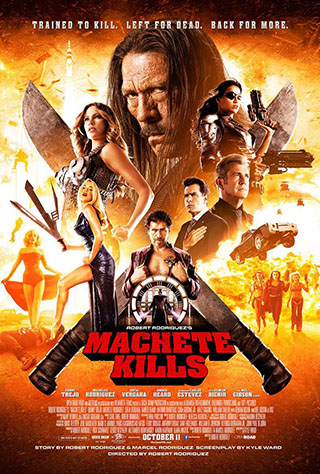 Exactly What It Says on the Tin
"I just gotta say that you are one genuine article, Genghis Khan, high-caliber, fucker-people-upper."
—Voz
Advertisement:

Machete Kills is a 2013 exploitation action film directed by Robert Rodriguez. It is the sequel to Machete.

In exchange for a full pardon and US citizenship, the President of the United States (Charlie Sheen) tasks Machete (Danny Trejo) with stopping insane Mexican revolutionary Marcos Mendez (Demián Bichir) from launching a missile at Washington DC. With help from his new handler Blanca Vasquez aka Miss San Antonio (Amber Heard), Machete infiltrates Mendez' secret base, but runs into trouble when he finds out that Mendez has wired the detonator to his heart, which Mendez then activates, starting a 24-hour countdown until the missile launches.

Machete has a day to get Mendez across the US-Mexican border alive to the only person who can deactivate the detonator: Corrupt Corporate Executive Luther Voz (Mel Gibson), who has his own agenda. Adding to Machete's troubles, Mendez left instructions to put a ten million dollar bounty on his own head if anything happened to him, which put several people on Machete's trail, including the perfect disguise wearing assassin El Camaleón (Walton Goggins/Cuba Gooding Jr../Lady Gaga/Antonio Banderas).

Rounding out the cast are Desdemona (Sofía Vergara), a madam and leader of a gang of assassins, and Michelle Rodriguez reprising her role as Luz.

It will be followed by Machete Kills Again ...In Space! ...Hopefully.