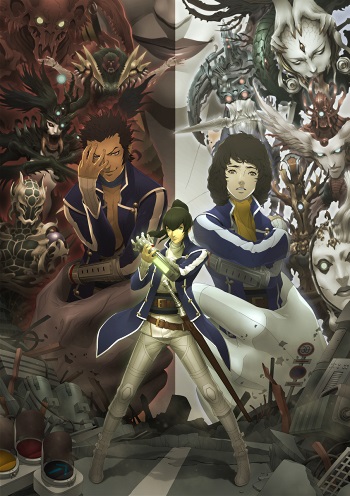 What you do will create a world...
"Adam did not eat the apple because he desired it. He ate it because it was forbidden. Now the apple has been set before all of you. Eat well!"
— The Black Samurai
Advertisement:

The Eastern Kingdom of Mikado is a peaceful land whose inhabitants are rigidly divided into two castes: the common Casualry and the elite Luxurors. Normally, it is impossible to transcend the class you were born into; that is, unless you are chosen at the age of eighteen by "the Gauntlet Rite" to become a Samurai, one of the sworn protectors of Mikado.

You are chosen to become a Samurai, and learn a truth kept hidden from the general population: that beneath Mikado lies Naraku, a realm of demons which the Samurai are tasked with suppressing. Yet when a mysterious Samurai in black armour begins to spread demonic influence beyond the borders of Naraku, the Samurai are at a loss. That is until the Monastery- a religious order of researchers and the most influential faction within Mikado- step in. Convinced that the answers lie within Naraku (and hungering for the "ancient relics" buried within), the Monastery order the Samurai to travel to the deepest and most forbidden levels of Naraku in search of the "Black Samurai". With the most senior Samurai refusing to break their code, it's up to you and your fellow Samurai apprentices to lead the exploration and discover the secret kept hidden at the lowest level of Naraku... a secret that reveals this is but the beginning of your adventure.

The game uses a blend of old and new MegaTen, with field exploration in 3D, a la Nocturne, but battles in first-person 2D with animated sprites, a la Strange Journey. SMT IV also reuses the Press Turn system from Nocturne, where weaknesses can be exploited for extra turns, and the Pre Existing Encounters system from Persona 3 and Persona 4, where enemies can be seen on the field and hit for advantages in battle. However, there are also battles against special "Horde" enemies, which appear as large crowds of enemies. There is also the Smirk system. When performing certain actions in battle (like nullifying attacks), a character will smirk, which guarantees the next attack move to be incredibly powerful.

The game was released on May 23, 2013 in Japan and was released on July 16, 2013 in North America - notably, one of the shortest turnaround times in franchise history for the export market at the time (Shin Megami Tensei V would later get a same-day international release). Unfortunately getting it to Europe took a bit longer- it was finally announced for a (download-only) release on October 30th 2014.

A Spin-Off game following a new group of Hunters in Tokyo, Shin Megami Tensei IV: Apocalypse, was released in Japan on February 10, 2016.

I'll register that as a new trope on the list.

Congratulations on completing the page!