First Time in the Sun 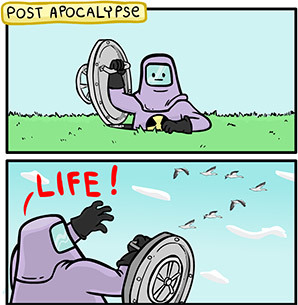 You have a person or, more likely, a large group of people, who have been raised somewhere bleak and cruel, usually Beneath the Earth, a City in a Bottle, or in some overgrown urban or industrial setting in which no beauty remains among the cold architecture and pollution. Striving to escape their hellish lives, these protagonists go through a harrowing adventure in order to find the lush and growing world they know is out there somewhere. Finally finding themselves on the alien surface, they look around, stunned and uncertain, and...

Cue the Sun. Its power and majesty enhanced through unaccustomed eyes, all who behold it find themselves full of wonder and hope. (Even if Day Hurts Dark-Adjusted Eyes, and they find it difficult to endure.)

This is a moment in which is the beauty of nature is expressed in order to indicate what the characters have gained from their struggle, as well as to promise that they'll be happy in their new environment, even if Fridge Logic would imply that they will have trouble surviving in an unfamiliar world. Note that though the sun is the most common symbol used in this moment, it is not necessary, and could be replaced by the moon, a sweeping hillside, or any celestial body or grand vista, or even something small and microcosmic.

A variant happens just before the climax, during the Darkest Hour: the characters are on the verge of giving up, when this symbol of potential fulfillment appears, reminding them that they have something worth fighting for and giving the strength for a Heroic Second Wind. The apparition is especially common for one who is dying or about to die, particularly from Heroic Sacrifice, as if to show them that their death is not in vain.

Sub-Trope of The Outside World and The World Is Just Awesome.

Be Warned. As an Ending Trope, there will be spoilers.

Arlo in the human world

Arlo is excited upon leaving the swamp for the outside world, and explores his new surroundings.

Arlo in the human world

Arlo is excited upon leaving the swamp for the outside world, and explores his new surroundings.