Western Animation / Kipo and the Age of Wonderbeasts 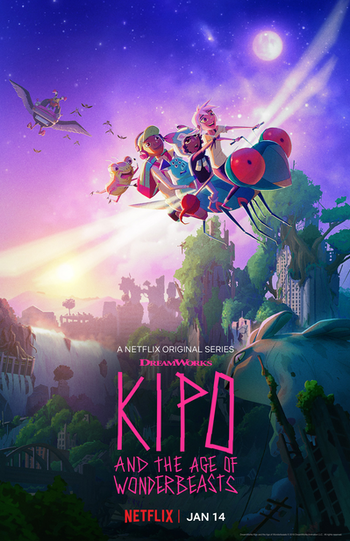 "Up on top, on my own,
A human girl, so far from home,
The flowers are big,
And the bees are weird,
It's dangerous, just like I feared,
On the surface worl—AAH! STAY AWAY!"
— Kipo, before being attacked by a giant bird
Advertisement:

Kipo and the Age of Wonderbeasts is a Netflix original animated series produced by DreamWorks Animation and animated by Studio Mir, created by Radford Sechrist (How to Train Your Dragon 2, Kung Fu Panda 2) with Bill Wolkoff (Once Upon a Time, TRON: Uprising) serving as co-executive producer. The show is based on the short-lived webcomic Kipo created by Sechrist.

The series follows Kipo (Karen Fukuhara), a teenage girl who lives underground with her scientist father over 200 years after the apocalypse. That is, until her community is destroyed, leaving her separated from him and stuck on the fantastical surface world that has become overrun by mutants both intelligent and beastly. With the help of surface-dwelling survivors including the savvy Wolf (Sydney Makayla), the cheerful Benson (Coy Stewart), a talking insect named Dave (Deon Cole), and a mutated pig Mandu (Dee Bradley Baker), Kipo embarks on a journey through this ruthless yet adorable wonderland in order to reunite with her father. Along the way, the group encounters various quirky and dangerous beings, as well as find themselves in the middle of a devious world domination plot wherein Kipo and her people play a vital role.

The first two teaser trailers can be seen here

, and the season one trailer here

and the trailer here

. The third and final season aired October 12, 2020, and the trailer can be watched here

Kipo and the Age of WonderTropes!

"Pop a lemonade, go crazy crazy
Nothing in this life gonna faze me
Everywhere we go, we gonna light it up
Show up, show off, we gonna rise above
Hey, life's a party..."
— Ending Theme, "Age of Wonderbeasts"
Feedback

The opening sequence for "Kipo and the Age of Wonderbeasts" has the theme tune fade in at the end of an episode's cold open, before hard-cutting to the show's logo.

The opening sequence for "Kipo and the Age of Wonderbeasts" has the theme tune fade in at the end of an episode's cold open, before hard-cutting to the show's logo.