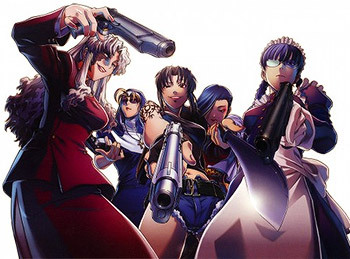 Welcome to Roanapur, the sunny seaside town where there's a rose on every corner. Make light of them and you may get pricked.
"Are all girls like this, or just the ones I know?"
— Ron Stoppable's newest female acquaintance springs into action (like all the others), Kim Possible
Advertisement:

Gender equality is a bit of a funny thing.

In some fiction, however, it seems that being a woman instantly gives you masterful ability in gun-slinging, martial arts, swordplay, or sometimes more. In these settings, almost every major female character is an incredibly dangerous badass who could take on the police and military with their hands tied behind their back, and are far more numerous than the men. While that's not to say that the ass-kicking men are non-existent, they are either secondary characters or just vastly outnumbered. It's far more likely that the men will be a Non-Action Guy, tagging along and acting as either Mission Control or moral support.

When you have only a small squadron of badass women, that's an Amazon Brigade. When nearly every man and woman and maybe even some kids are badass and the numbers are fairly equal, that's a World of Badass. This trope is not about the women of a World of Badass; rather, it is when the numbers are decisively tilted in the women's favor. Military Moe is a subtrope of this, a setting with cute girls in military-like situations.

This does not mean that there are lots of Designated Girl Fights. Rather, it means that most of the people doing the fighting are girls. However, if one of the rare male fighters only finds another, equally rare, male fighter to tussle with, then the trope is in effect.