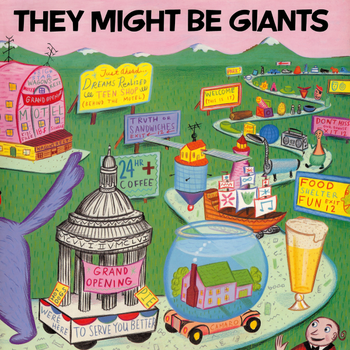 "If there's a knock at the door, boy, forget about it!"
"Everything right is wrong again
Just like in The Long Long Trailer
All the dishes got broken and the car kept driving
And nobody would stop to save her"
—Everything Right Is Wrong Again

They Might Be Giants is the official debut album of They Might Be Giants - funny how that works - and was released in 1986 on the Brooklyn label Bar/None A number of the songs have remained among the band's most popular. These include "Don't Let's Start" and "Put Your Hand Inside the Puppet Head". The album spawned two singles: the aforementioned "Don't Let's Start" and "(She Was A) Hotel Detective".

Do the dumb tropes I gotta do: