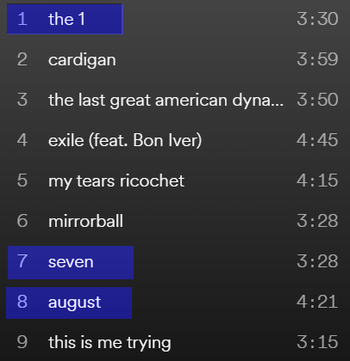 Self-Referential Track Placement is when the title of a song alludes or corresponds to the track's placement on the album.

The most basic version of this is when a song with a Numerical Title like "8" or "Fifteen" is placed as track #8 or 15.

In subtler instances, a track with a name that suggests a certain number—through mentioning a specific month or day or alluding to a Numerological Motif—will be placed at the matching track number.

The tendency for the last song on an album to be called something like "The End" is covered by Album Closure.

There's only two songs in me, and I just wrote the third...