Music / Christine and the Queens 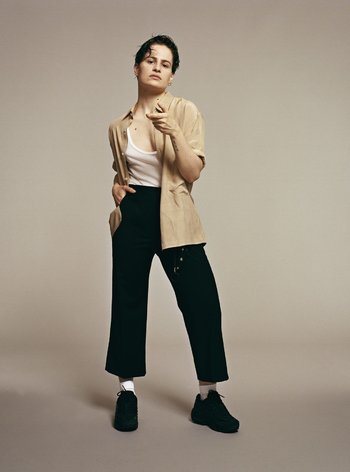 Damn, he'd be your lover. note Photography by Jamie Morgan

Christine and the Queens - Chris for short - is the stage name of Héloïse Letissier (born 1 June 1988), a French singer-songwriter. He describes his own music as "freakpop", taking inspiration from disco, funk and French and English pop music, all seasoned with a generous dose of Gender Bending.

The "Queens" part of his name comes from the London drag scene in which he had his career start, with drag queen musicians often backing him up on stage in early performances. After a number of EPs and singles, he released his debut album Chaleur humaine in 2014 to critical acclaim and commercial success. He was awarded the Victoire de la Musique (France's equivalent of the Grammy Awards) in 2015 for Best Female Artist of the Year, and when the album was re-recorded in English and released in 2016, it was featured on several end-of-year lists including NME and Rough Trade.

At the start of his second album cycle, he adopted an even more androgynous look and started going by the name Chris, to appear "bolder, stronger and more muscular". His next effort, likewise titled Chris, was received even better than his debut. The following year he headlined the All Points East festival in London with an acclaimed performance, his first time as headliner of an UK music festival, and he also performed during the finale of RuPaul's Drag Race season 11, making his stage name go full circle. His most recent endeavour, an EP titled La vita nuova, was released in 2020 with an accompanying conceptual short film.

He was named by Vanity Fair as the most influential French person of 2016, for his artistry and "radiance of French genius"note  Presidential candidate and eventual winner Emmanuel Macron was second. The following year he appeared on the cover of Time as one of the ten leaders of the next generation, and Forbes selected him as one of the "30 under 30" in Europe. He identifies as pansexual and genderqueer. As of his most recent record, Redcar les adorables étoiles, Chris uses he/him pronouns.

Christine and the Queens' music provides examples of the following tropes: