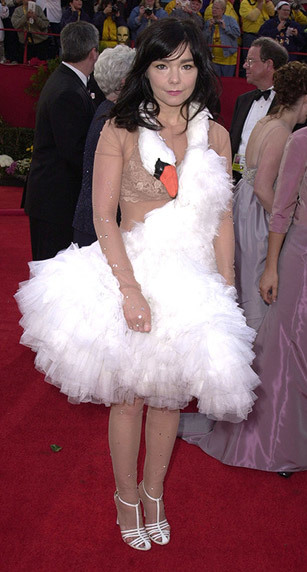 Björk wearing her infamous swan dress at the 2001 Oscars.
Influences:
"You shouldn't let poets lie to you."
— Björk, on her television

Björk is what happens when you dress a cat in Alexander McQueen, teach it how to type, and use the results for lyrics. OK, not really. But kinda.

Björk Guðmundsdóttir (born 21 November 1965) is a woman from Iceland who's famous for several things: her distinct voice, her experimental (but awesome) music, her unique fashion taste, her surreal music videos, her acting in the film Dancer in the Dark, her accent, and that one time she beat up paparazzi.

From 1986 to 1992, she was in the alternative rock band called The Sugarcubes, who were the first Icelandic musical act to ever gain any sort of success outside of Iceland (mostly in the UK and American alternative radio), mostly from the endorsement of beloved Radio 1 DJ/indie tastemaker John Peel. After they broke up, Björk went on to have a vastly more successful solo career.

Her music cannot be shoehorned into one category. She's not just an electronic artist; she has dabbled in many genres, including: a cappella, jazz, pop, alternative rock, classical, orchestral, folk, and avant-garde.