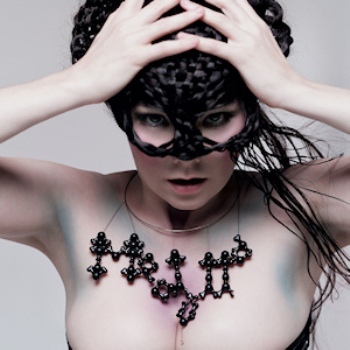 A triumph to have a heart for...
Medúlla is the most extreme record Björk has ever released and the most immediately accessible.
Rolling Stone, review of the album in 2004.
Advertisement:

Medúlla is the sixth studio album by Björk, released in 2004. The album is notable for being almost entirely sung A Cappella, with every possible kind of human voice singing you can imagine.

It is seen as one of her most audacious experiments, but has garnered a lot of praise for being one of her masterpieces. The most successful single of the album was "Triumph of a Heart", while "Oceania" was also enough of a fan favourite to be performed by Björk during the opening ceremony of the 2004 Olympic Games in Athens, Greece.

And for fans of memes: The "Triumph of a Heart" video provided the Internet with the I Should Buy A Boat Cat

Triumph of a Trope: