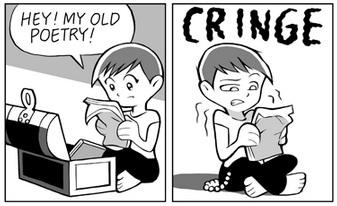 "Ah, yes, I wrote the 'Purple Cow,'
I'm Sorry, now, I wrote it;
But I can tell you, Anyhow
I'll Kill you if you Quote it!"
— Gelett Burgess, Confession: and a Portrait Too, Upon a Background that I Rue
Advertisement:

They say that you have to do bad work before you can do good work. Not just one piece of bad work, but tons of it, some so bad that it puts The Eye of Argon and Plan 9 from Outer Space to shame.

Whether it's fan fiction or original published work, some really bad stories have been written (this goes for other art forms too, sometimes just as badly). And even though you have to do bad work before you can do good work, the bad work still exists and the creator has to deal with it. Sometimes it's published to wither and die on its own; most of the time, it isn't.

Of course, this isn't limited to bad or mediocre stuff: sometimes the work is So Cool, It's Awesome or a Cult Classic, yet those who own the rights feel it should sit in a vault while pulling down any and all online copies. Sometimes, the shame happens because a work was Fair for Its Day but contains concepts, themes, or character archetypes that simply aren't considered acceptable in the present (that, or the work espouses values that were unacceptable even at the time the work was created because the author was in a REALLY bad mood that day). Another possible reason is that the work heavily promotes a viewpoint that its author no longer holds.

One of the leading causes of Dead Fic: authors express intent to finish their old work, read through it as a refresher, and can't get past the first chapter because of how bad they think it is. In fact, the vast majority of fan fiction in general becomes this after the author gains some age and perspective. This is commonplace at the start of someone's fan fic writing career; the author will want to write a really good fight scene or really interesting plot, but their inexperience in writing leads to plot holes. Then, as the writer gets better and looks back on his old work, they'll cringe as they realize how bad it was; naturally, they may want to erase all memory of it.

It stands to reason that this trope is not all black and white: there are hundreds of ways someone can regret the work they did and much of it may not have anything to do with the final product. An Old Shame may come from having bad memories of the Troubled Production, loving the experience but perplexed at the direction it took or greatly disliking the Typecasting (or other attention) they received after the fact. It's actually rather common to make extremely close friends while working on an infamously bad TV show or movie.

Rule of Thumb: If the creator tries to erase any trace of its existence, shies away from it, moves on to the next question when it's brought up, issues a public apology, or otherwise just tells people not to care about it, it's an Old Shame.

Compare Creator Backlash (where the work in question gained popularity but earned the ire of its creators anyway), Growing the Beard, Money, Dear Boy, Bleached Underpants (which this may overlap with) and Magnum Opus Dissonance (when a work the creator is ashamed of becames their biggest hit). Contrast Condemned by History, where it's the fans who don't ever want to remember they liked this work. See also Ham and Cheese, where an individual in a movie they know will at some point become Old Shame decides to have fun with it, and Took the Bad Film Seriously, where an individual doesn't even seem to realize the movie is awful and gives all they have. Generally the opposite of First Installment Wins, it can be the source of Never Live It Down. Art Evolution is a visual example of this: there's no faster way to embarrass a webcomic artist than pointing to something early in their archives. I Was Quite a Fashion Victim is this trope applied to clothing fashions.

It should be noted that characters within a work of fiction can also see something in their past as an Old Shame. Such cases would be categorized under In-Universe, and thus should be linked as such on a work's trope when it applies within the work itself.