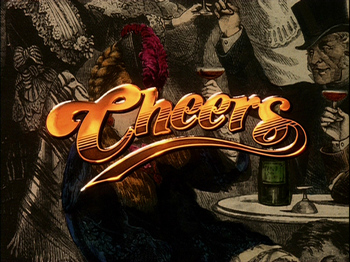 Cheers was a hugely popular sitcom, which aired on NBC for eleven seasons (1982–93), about the goings-on at a friendly neighborhood bar in Boston. When it began, it was notable for the fact that the entire show took place in the bar, never venturing outside, but this was dropped after a while.

The bar was owned for much of the series' run by Sam Malone (Ted Danson), a former relief pitcher for the Boston Red Sox whose career was cut short by alcoholism. His employees include short-statured and short-tempered waitress Carla Tortelli (Rhea Perlman) and absent-minded bartender Ernie "Coach" Pantusso (Nicholas Colasanto), his former pitching coach at the Red Sox. Bar regulars include underemployed accountant and armchair philosopher Norm Peterson (George Wendt) and Know-Nothing Know-It-All mailman Cliff Clavin (John Ratzenberger). The lives of the Cheers staff are shaken up when book smart but street dumb Boston University graduate student Diane Chambers (Shelley Long) is dumped by her fiancé while waiting for him at the bar; at a loose end, she accepts a job as a waitress.

Cheers can be neatly divided into the Diane years (Seasons 1-5) and the Rebecca years (Seasons 6-11). During the first five seasons, the Sam-Diane romance was the central theme. Their relationship was the most over-elaborate in television history, until Ross and Rachel came into the picture. After an acrimonious breakup at the end of Season 2, Sam had a relapse of his alcoholism while Diane voluntarily committed herself and fell in love with her psychiatrist, Dr. Frasier Crane (Kelsey Grammer), who returned with her to Boston to help Sam kick the bottle. However, Diane's feelings for Sam had not gone away, and between Seasons 3 and 4, she left Frasier at the altar and, after trying to find herself through first hedonism, then asceticism, returned to her old job at Cheers. After Nicholas Colasanto died of a heart attack in 1985, Coach was likewise written out as having died between seasons, and in Season 4, he was replaced by his friendly but naive young penpal, Woody Boyd (Woody Harrelson) of Hanover, Indiana. Meanwhile, just as Diane had moved on from her broken engagement to Frasier by re-kindling her romance with Sam, so Frasier found an unlikely new love in fellow psychiatrist Dr. Lilith Sternin (Bebe Neuwirth) in Season 5; they married in Season 6 and became parents to a son, Frederick, in Season 8.

After Season 5, Long left for a less-than-brilliant career in movies, and to raise her child, so the five years of Will They or Won't They? culminated in Diane calling off her wedding to Sam to pursue her writing career at the urging of both her ex-fiancé and Sam himself. In Season 6, Kirstie Alley joined the cast as Rebecca Howe, an ambitious but neurotic executive at the corporation to which Sam sold Cheers after Diane left; although Sam was given his job back as a bartender, ownership of Cheers was traded between Sam and Rebecca several times. Though the sexual tension between Sam and Rebecca remained a plot element, the show became more of an ensemble for its last six seasons.

For its first couple seasons, Cheers was teetering on the brink of cancellation despite acclaim from critics and actually came in dead last in the ratings its first year. However, it slowly became one of the most popular shows on television. Its final episode, which aired on May 20, 1993, was one of the most watched finales for a sitcom in American television history.

The first draft of the Cheers script was originally set in a hotel of all places, with wacky guests coming and going (the creators were inspired by Fawlty Towers). After the vast majority of script ideas ended up set in the hotel's bar, the producers just dropped the hotel concept entirely.

, which was used as the exterior. The two bars do not share a layout indoors, the Bull & Finch—renamed Cheers Beacon Hill in 2002—being completely different, so a replica of Cheers as it appeared on the show was built at Faneuil Hall. The replica bar closed in August, 2020. Most considered the replica a cheap tourist trap (the Bull & Finch/Cheers Beacon Hill less so, and it has some damned good baked beans).

The show produced two spin-offs: The Tortellis, a mainly forgotten one-season show featuring Carla's ex-husband Nick and his family, and the very successful Frasier, featuring occasional guest appearances by the Cheers cast (most frequently Lilith and a twice-recast Frederick), which ran for another 11 years.

"Sometimes you wanna go, where everybody knows your trope":

Meanwhile, Frasier finds he enjoys hockey and doing "guy stuff" at the bar; for him, it's cathartic.

Example of:
Gift of Song