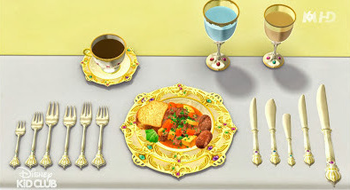 A blatant sign that you are not in an ordinary place any more: a table which, in addition to being often overly long, is covered with much more cutlery than in Average Joe's home. More precisely, each plate has at least two glasses, two spoons, three forks and knives around it, all looking different and for a different purpose (soup or ice-cream spoon, fruit or oyster fork, dinner or steak knife, etc). In fiction, due to the Rule of Funny, it's common to increase the cutlery's number to the absurd, in the range of more than ten of each.note In formal aristocratic dinners there really can be this many — though not on the table all at the same time except on cruise ships

Said place settings are either found in three-star restaurants, in a billionaire's house, or in a royal palace. It's usually a quick way to establish that the owner of the house is wealthy — and maybe a bit of snob (and it's visually easier to spot than the precious metal the cutlery is made of.)

The other common use is for comedic effect when the main character is absolutely not used to such a place setting, due to being a neophyte in regards to fancy dinner tables. Usually, it's because he or she has suddenly made a fortune. Other reasons are because the hero pretends to be rich or impersonates a wealthy person, or he was invited to dine with the rich for whatever reason. In these situations, their awkwardness will make their Nouveau Riche status obvious to other guests. In the case of an impersonation, it can be a way to Spot the Imposter for said guests.

The most common mistake for the hero is to grab any piece of cutlery, but the latter is never placed in an illogical order: there is an unspoken rule of using cutlery which is mostly just from the outside in. This rule of thumb may be told to the person.

This is a Luxury Trope, as a single set of cutlery is enough to eat with on a daily basis — having more for each kind of course is a sign of refinement, or at least of Conspicuous Consumption.

Many real-world fine dining venues avoid the confusion associated with this trope by simply bringing out the appropriate cutlery with each course.

One of Mickey's fancy gentleman lessons.

One of Mickey's fancy gentleman lessons.