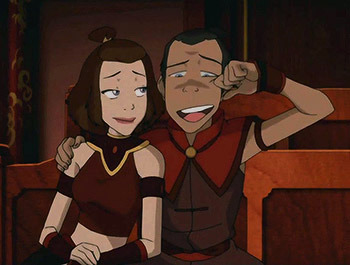 Not that she minds.
Advertisement:

Alice and Bob go to the theater, and there, thanks to the dark...

If Bob has pervert's instincts he may try bosom or knee instead. And if Alice likes it, it can go further with a kiss or even more.

Compare with Girls Are Really Scared of Horror Movies: That choice of movies is when the male character would rather have the girl thrown in his arms.

Overlaps with Unresolved Sexual Tension and Will They or Won't They? Often a first step in a Relationship Upgrade. Sister trope to Yawn and Reach, except that for reach the excuse Pass the Popcorn is more used in theaters. A variant can happen in front of a TV, just like in this