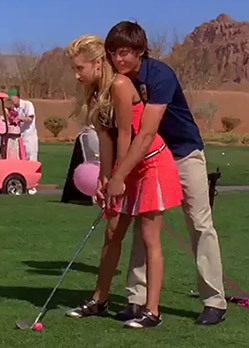 A particularly cringeworthy pun involving clubs and holes-in-one was carefully avoided here.
"Okay, anytime a man shows a woman how to do something from behind, it's just an excuse for him to get really close and breathe on her neck. Watch any sports movie."
— Nick Miller, New Girl
Advertisement:

Alice is helping Bob practice something like a sport or playing a musical instrument. Alice needs to help walk Bob through some motions. So Alice takes his arm or shoulder to put them in the proper position. Why is Bob blushing like crazy? And why does it take him forever to get it right?

A common Ship Tease situation that can be as awkward as it is sweet. Because one character has a secret crush on the other, or because they are two adamant Just Friends, or because they're arch enemies, the necessary physical contact takes on much more significance than intended for one or both.

Expect any bystanders to comment, "It's getting a little hot in here." See also Zip Me Up and I Didn't Mean to Turn You On.

Nicholas gets rather touchy-feely with Mia while teaching her how to shoot an arrow.

Nicholas gets rather touchy-feely with Mia while teaching her how to shoot an arrow.