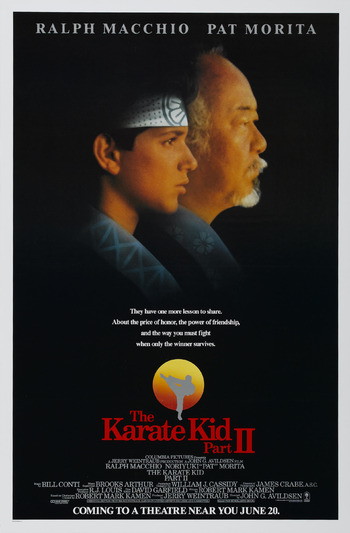 "Daniel-san, never put passion before principle. Even if win, you lose."
Daniel: Just forget about the honor garbage!
Miyagi: Have nothing to do with honor garbage. This have to do with village survival.
Daniel: This isn't three points and you're out! If you lose, I know what happens!
Advertisement:

The second movie in The Karate Kid series, released in 1986.

Six months after the first film, Daniel has broken up with Ali and is being set up to move in with Mr. Miyagi as his mom moves up north. Miyagi receives a notice that his father is gravely ill and he decides to return to his home village in Okinawa. Daniel wants to support his friend and father-figure and goes with him, also hoping to learn more about Miyagi's history.

At the village many things have changed, and Daniel learns of an old feud between Miyagi and his old friend Sato that has not passed with time. (Miyagi left Okinawa so he would not have to fight to the death.) Daniel also begins a troublesome relationship with Sato's nephew Chozen, who is even more aggressive. Miyagi's father dies but that did not subside Sato's anger. Along the way, Daniel also begins a new romance with a local girl, Kumiko.

♫ I am a man who will fight for your honor
I'll be the hero you're dreaming of
We'll live forever, knowing together
That we did it all for the glory of love. ♫
Feedback

Example of:
So Last Season