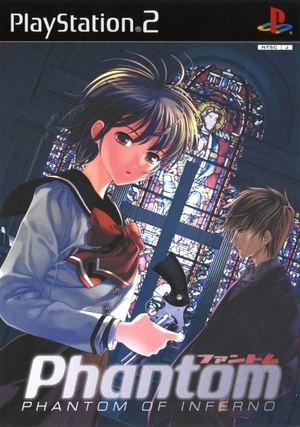 Phantom of Inferno is the first (2000) release by the visual novel developer nitro+, whose games are almost invariably dark, scary, and full of murder. Nitroplus can be considered a blender of ideas, but Phantom in fact has a simple story in comparison to their other games.

The story follows the life of a young man who sees something he shouldn't have seen, is captured and brainwashed by a shadowy organization called Inferno and then is given the choice "join or die". He is trained as an assassin by a soft-spoken girl called Ein. Ein is Inferno's top assassin, code-named "Phantom" and controlled by the sinister Scythe Master, who also brainwashed the man. The man is given the name Zwei and begins his work at Inferno.

The game was first given an adaptation which tried to sum up the game in 3 OVA episodes in 2004. In 2009, a new anime entitled Phantom ~Requiem for the Phantom~ was produced by Bee Train with Yosuke Kuroda writing and supervising the scripts (including a few from the original scenarist Gen Urobuchi himself) and directed by Koichi Mashimo. The game has since been remade for the Xbox 360 featuring the anime design created by Bee Train, for 2012 release. This release was ported on PC in 2013.

Notably, previews for the original game's second release aired at around the same time as Noir, which led to viewers connecting the two (as they have similar themes).

Alternative Title(s): Phantom Of Inferno, Phantom Requiem For The Phantom