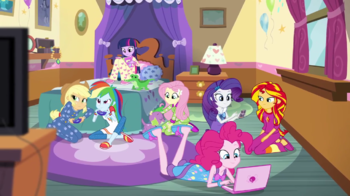 Cook: Pyjama party means only one thing — girls getting friendly.
JJ: Hang on. Even I know that only happens in overblown and possibly illegal teen dramas.
— Skins

A gathering of female characters, particularly teens or pre-teens. Often to talk about boys or make-overs. A staple of the simpler days of the Dom Com. Also popular in slasher horror as a convenient way to get a lot of attractive young women under one roof to terrorise them.

More often called a pyjama party in the UK (and, by adoption, usually in Japan as well), seeing as that's the general clothing worn at such an event. And anyway, who sleeps at one of these things? Wacky Fratboy Hijinx will often involve trying to gatecrash (or at the very least, watch).

Boys occasionally throw them as well, and they're full of tropes for tween boys. They just call them "sleepovers" instead of Slumber Party or Pajama Party, though - they usually consider these terms too associated to girls.

Watch out for Sleep Squashing, Blanket Tug O' War, Childish Pillow Fight, and, if you're the only guy caught, Makeover Torment.

Amber insists Ruby and Jade don't fit in at the royal sleepover due to their abnormalities, but Sofia doesn't agree.

Amber insists Ruby and Jade don't fit in at the royal sleepover due to their abnormalities, but Sofia doesn't agree.