Fanfic / A Triangle in the Stars 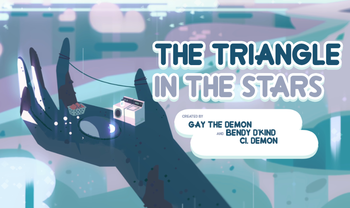 It was just a regular Saturday evening. Steven Universe was just chilling on the beach. Soon, however, he comes face to face with Bill Cipher's statue, as it had somehow crossed the ocean and wound up on Beach City. He decides to take it back home, since the Gems are away. This, obviously or not, leads to trouble...

, otherwise known as Ace, or Gay, the Demon, both of whom are on Google Plus where this story originated as a roleplay May 2016. It has then been uploaded to Fanfiction.net

A Triangle In The Stars provides examples of: