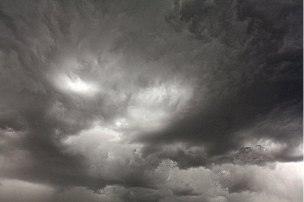 This is a trope for when the characters are explicitly beset by hostile, driving rain, tornadoes, dust storms, or other oppressively inconvenient weather, which only lets up at sudden, inconvenient increments, often to indicate they are in a Hungry Jungle or other hostile environment. The characters will spend their time asking "when will this ever let up?" When it does let up, it will start back up again the minute they comment on it. Related to When It Rains, It Pours.

Even mentioning it is Tempting Fate. If the mission depends on Phlebotinum, transportation, or an easily-damaged MacGuffin, weather of this sort will ruin whatever conditions are needed for the original objective. They may sometimes be artificially made. Also useful for preventing rescues; compare Snowed-In.

Deadly Dust Storm is a Sub-Trope. Contrast Empathic Environment tropes, where the weather merely sets the mood rather than actually influencing events. Compare Weather of War, Caught in the Rain, and Genius Loci. The opposite of Weather Saves the Day.

The Hundred Acre Wood suffers a dangerous windstorm. Is it Windsday again?

The Hundred Acre Wood suffers a dangerous windstorm. Is it Windsday again?