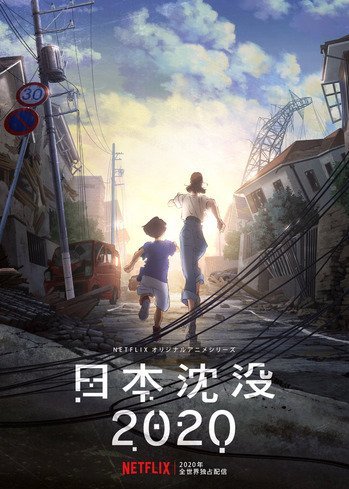 Japan Sinks: 2020 (日本沈没, Nihon Chinbotsu 2020) is the second collaborative series between acclaimed director Masaaki Yuasa of DEVILMAN crybaby fame and Science SARU, which was also distributed through Netflix. It follows the Mutohs, a mixed-race Filipino-Japanese family as they struggle through the collapsing countryside of Japan after disaster strikes. The journey centers around Mutoh Ayumu, a naive trackstar, her fully Japanese father Koichiro, larger than life swimmer mother Mari, and her little brother, wannabe e-sport athlete Go. Tagging along are two classmates who manage to survive the destruction with her, Nanami and Koda.

Based on the 1970's novel of nearly the same name written by Sakyo Komatsu, Japan Sinks: 2020 takes many liberties with the characters, events and themes. As such, many of the tropes that applied to the book might not apply here.