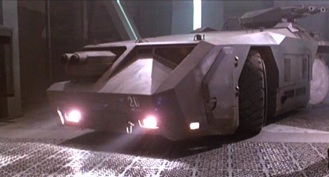 Lovely wheels, shame about the ground clearance!
"One APC... alone... betrayed by the Let's Play series it loves, now, its only hope in its final hour of need."
— Battlefield 315, Let's Play Battlefield 1942, Episode 57

Sometimes in war, neither the Cool Car nor the Cool Tank is enough. You need something that can carry The Squad into and out of battle and even fight alongside it if need be. How do you do this with a simple Armored Personnel Carrier? Easy, slap some more armor on it. Give it a BFG or three and maybe even the ability to crush other things like a tank!

Enter the Awesome Personnel Carrier, the all-around badass vehicle not just meant to be an overpriced and underarmored taxi. In modern warfare settings, expect these to be ripped off from the BMP and M2 Bradley series of vehicles or some of their relations. In sci-fi settings, this might incorporate more elements of the Cool Tank or have an exotic unloading method, or even exaggerate it by being a Drop Ship.

Special mention should be given here as to terminology. The term IFV denotes Infantry Fighting Vehicle, as in a vehicle that directly engages and suppresses the enemy while the squad does its thing after exiting the vehicle. An APC, or Armored Personnel Carrier, simply shuttles the squad to and from battle. It might not actually do any fighting whatsoever. But that doesn't mean it can't be cool on its own. APC is commonly used to cover both types of vehicles despite this being incorrect, although the line between armed battle-taxi and light IFV can be quite blurred.

Naturally, compare Cool Tank. Merkavas cheat by being both, and the Russian Mi-24 Hind ups the stakes again by flying. If the APC often gets confused with an actual tank you've got Tanks, but No Tanks. For more information on APCs and IFVs, see Armored Fighting Vehicles.