I Choose to Stay 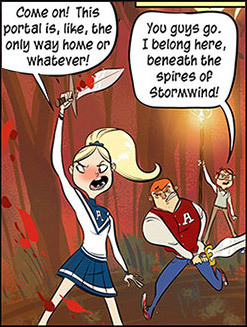 "Don't take this the wrong way, but I found a place where I can make a difference, where I'm more than Superman’s kid cousin. I feel I belong here. Also, I met this boy ..."
— Supergirl, Justice League Unlimited
Advertisement:

At the end of a story about a character being immersed in a new world which they may hate or not, whether they're trapped in the wrong body, warped to another time or dimension, or forced to move in with their in-laws, there is often a scene at the very end where it's all over and now they get to go back to their old, beloved lifestyle.

But... wait! What's this? The new environment has apparently grown on the character so much, that they don't want to go back? They choose to stay in their new environment and live happily ever after?

It can also be a consequence of Heroic Resolve. The hero may have a conflicting choice: yes, he can leave the war and go home, but if he does so, the war will continue and his friends will be killed or enslaved. Perhaps the hero is The Chosen One, and with this role Comes Great Responsibility. By choosing to stay and rejecting the chance to leave, the hero proves that he is not the victim of Deus Angst Machina, but that he willingly accepts the harsh conditions on behalf of the others... the basic definition of heroism.

A Love Interest can also be a factor. Indeed, this trope is often encouraged by a Fantastic Romance. By choosing this trope, the hero may think that You Are Worth Hell or otherwise more important than what's on the other side. No Star-Crossed Lovers here! One does wonder about the person's parents back home if they are underage though, and even if they're not, what about their friends and family? Wouldn't they miss them and/or wonder what happened to them if they choose to stay? Sure they would, but the same applies to all the friends they've made in this new world, and any family that they might have picked up along the way. The decision to stay or leave then becomes a Sadistic Choice.

The opposite of But Now I Must Go and "Leaving the Nest" Song. Often a result of Becoming the Mask. See also Going Native, Home Sweet Home, and Send Me Back. Compare Keeping the Handicap, Stay with the Aliens and Can't Stay Normal.

Buck is offered the chance to finally leave the dinosaurs' land at the end of the Ice Age: Dawn Of The Dinosaurs, and actually considers it for a moment, but ultimately chooses to stay when he realizes Rudy is still alive.

Buck is offered the chance to finally leave the dinosaurs' land at the end of the Ice Age: Dawn Of The Dinosaurs, and actually considers it for a moment, but ultimately chooses to stay when he realizes Rudy is still alive.