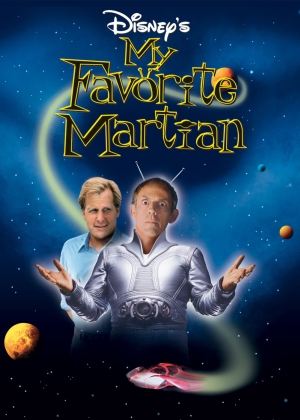 And to think, eight years ago, Christopher Lloyd was in Daniels' shoes...
Advertisement:

My Favorite Martian is a 1999 science fiction comedy film directed by Donald Petrie, starring Christopher Lloyd and Jeff Daniels. It is based on the 1960s sitcom of the same name, though expands on the original show.

The film is about a Martian named Martin (Lloyd) who, along with Zoot, his talking suit (Wayne Knight) gets stranded on Earth. Being taken in by reporter Tim O'Hara (Daniels), they must try to find a way to get Martin home while avoiding the government operation SETI from capturing him and doing what the government does best.

The film was released in theaters along with an animated short starring Pluto called Pluto Gets the Paper: Spaceship.