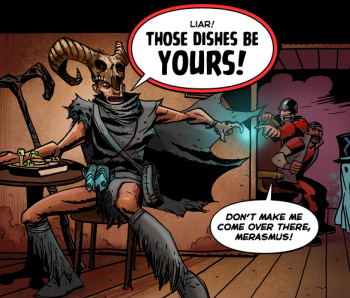 "Soldier! You were the wooorst roommaaate!!"
Christine: [recorded] Hi, you've reached the Tittles. We can't come to the phone right now. If you want to leave a message for Christine, press one.
Bentley: For Bentley, press two.
Tarfal: Or to speak to or worship Master Tarfal, Underlord of Pain, press three.
— Angel, "Quickening"
Advertisement:

Heroes tend to lead very... interesting lives, full of so many strange and fantastic sights and events that before long he's Seen It All, or at least dealt extensively with one type of non-mundane creature/phenomenon. As a result of this, or coincidentally, the character now casually lives alongside or in close proximity with an alien, ghost, vampire, mutant and/or robot (though not necessarily all in one character).

The nature of the arrangement varies. They might be allies of long standing, the monster came with the apartment as an unadvertised "bonus" and they've since hit it off, or both have made the completely mundane arrangement to share living space. It doesn't even have to be The Unmasked World, any monster that can fool muggles is going to have to pay the rentnote (Hypnotic Eyes and Undead Tax Exemption notwithstanding), and it's sometimes convenient to share space and bills. If they're Vitriolic Best Buds, expect them to claim they keep the other as a "pet".

The setting doesn't have to be a Fantasy Kitchen Sink for this trope to happen, it just needs one difference that makes it Like Reality, Unless Noted, and the character has to live right next to that thing. For maximum effect however, the character's house might become a full blown microcosm of the world's supernatural scene.

The "roomie" might be a Nice Guy ghost, a personable Fully-Embraced Fiend of a vampire, The Protagonist's Magical Girlfriend, or one of the Mad Scientist's Mascot Mooks that has been reprogrammed/retrained. If Tom develops an Unwanted Harem, each girl will be from a different monster race. Mind the Fur Against Fang.

Expect a lot of humor deriving from the cross-species Culture Clash. Two Gamers on a Couch frequently uses the Monster Roommate as a pet or one of the gamers.

Compare Pals with Jesus, where the friend is a powerful cosmic or mythical figure, and Pet Monstrosity, where a monster is kept as a pet.