Sealed Room in the Middle of Nowhere 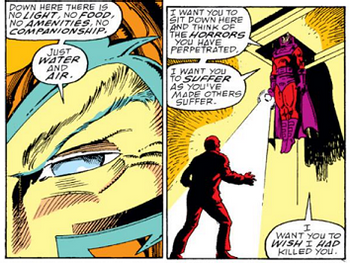 "I've done far worse than kill you, Admiral. I've hurt you. And I wish to go on ... hurting you. I shall leave you as you left me — as you left her. Marooned for all eternity in the center of a dead planet. Buried alive. Buried alive."
— Khan Noonien Singh, Star Trek II: The Wrath of Khan
Advertisement:

Also known as an Oubliette, the Sealed Room in the Middle of Nowhere is the least dramatic Death Trap of all. Not being an elaborate plan of disposing enemies, the sealed room is usually more of an opportunistic ploy — the good guys have gone into an abandoned mine or ancient crypt or isolated cave of their own volition, and the villain just takes this lucky chance to seal them in forever. Of course, forever turns into the twenty minutes or so it takes the hero to find an alternate way out, or occasionally to be rescued. Sometimes the stakes are raised by having the room slowly fill with water or gas.

The quiet solitude of this trap can be used to effect a Locked in a Freezer plot between two characters.

Sometimes the tension of this Death Trap is increased by use of a good old-fashioned slowly-sealing door, which the good guys fail to squeeze through at the last second, or using a very small and unventilated space like a bank safe where the trappee will theoretically soon run out of air.

This trope might have roots in the Greek myth of Antigone, who performed funeral rites for her dead brother - a traitor to the state - and was sentenced to death by her uncle, King Creon. The death sentence was, simply, being sealed in a cave to die of hunger/dehydration. In the play by Sophocles, Creon later had regrets, but when he tried to let her out she had already hanged herself (It is a tragedy, what did you expect?).

This trap is often encountered in Medieval settings — the original Oubliettes were cellar rooms at the basement of the heaviest fortified tower in the stronghold, called the donjon (hence dungeon, an alternative spelling) with access only through a trap door at the upper floor.

See also Tailor-Made Prison and Closed Circle. Compare And I Must Scream and Maximum Fun Chamber. Super-Trope to the various structures with No Entrance.

Trapped in the Well of Souls

The Nazis seals Indy and Marion in the snake-filled Well of Souls.

Trapped in the Well of Souls

The Nazis seals Indy and Marion in the snake-filled Well of Souls.