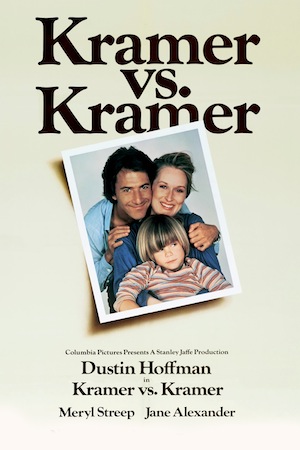 Adapted from the novel by Avery Corman, Kramer vs. Kramer follows the story of Ted Kramer (Dustin Hoffman). Ted's a workaholic who is not really involved in the domestic life of his wife Joanna (Meryl Streep) and 6-year-old son Billy. He is forced to become involved immediately one day, when Joanna leaves him, forcing him to raise Billy alone. A year and a half pass before she finally returns to claim Billy; an emotional custody battle ensues.

This was 1979's Academy Award winner for Best Picture, and the film that earned Hoffman and Streep their first Oscars for Best Actor and Best Supporting Actress, respectively. Robert Benton's wins for Best Director and Best Adapted Screenplay brought the total to five.

This has nothing to do with Cosmo Kramer.