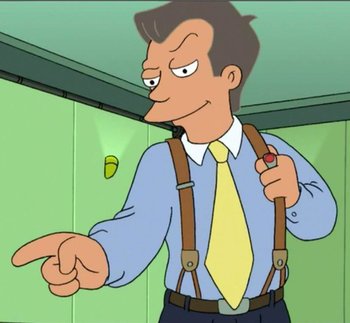 "It's all about appearances. That's why it's time to update our company's stodgy image and give it the sleek, dazzling veneer of the 1980s."
"Members of an overpriced household in an overpriced area with overpriced possessions, none of which are prepared to clean their own toilet, or put out the trash."
— Urban Dictionary's definition

Yuppie is an acronym of young urban professional, which first appeared in the media in 1982, and came to be one of the more characteristic period tropes of The '80s.

Yuppies were the members of the later Baby Boom generation, or "Generation Jones

" who became successful (or at least well-paid) white-collar workers while in their twenties and thirties, usually in finance, law, sales, architecture or management consulting. In the era's Standard Office Setting, yuppies stood out in that they were often young for their rank, typically Workaholics, and obsessively materialist (see below). In the case of yuppie women, this also included such fashion statements as power suits with large shoulder pads, voluminous or slick hair, and work-appropriate makeup that was also heavy and striking.

Outside of the office, yuppies tended to live in pricy—and often gentrified — inner-city apartments or restored older homes. More affluent ones could be classified as Nouveau Riche since they were prone to displays of Conspicuous Consumption but usually of the Simple, yet Opulent variety. Until it became commonplace, the yuppie's most distinctive attribute was the use of the Status Cell Phone; which allowed the yuppie to become a Clock King with a meticulously planned work schedule. As technology marched on, other attributes came to define them, such as trendy physical exercise (including yoga and advanced weight machinery), novelty electronic devices, a Cool Car (usually a BMW or Mercedes), and caffeine addiction, with an elaborate taste for exotic kinds of coffee.

Yuppies grew up in Suburbia as the children of middle-class or working-class parents but had a tendency to distance themselves from their upbringing due to the cultural, political, social, artistic attitudes, and tastes attached to it. A common (but not always applicable) stereotype about yuppies was, in their youth, they rebelled against the materialism and conformity of their parents and joined the 60s counterculture only to later re-enter mainstream society and embrace — to an even greater degree — many of the same moral failings they condemned their parents for indulging in. The younger boomers, who were too young to experience the sexual revolution and would have grown up during the 1970s and early 1980s, would have skipped the counterculture phase and embraced consumerism and pop culture growing up, while also turning their noses up against the antics of the earlier boomers.

Despite their material wealth, it was common in deconstructive works to have yuppies facing failure in their personal lives with such problems as substance abuse, marital strife, or lack of family commitment. Their perceived self-absorption, insufferable trendiness, snobbery, latent class anxiety, smugness, and fixation with making money also made them easy comic targets — if not outright villains — in many works during the 80s and 90s. In a Snobs Vs Slobs conflict, yuppies would definitely be in the former category.

Since they seemed similar upon first glance, it was easy to confuse a yuppie with a preppy. However, there was one key difference between the two: yuppies were new money while preppies were Old Money. There was also some slight overlap between the yuppie and the Self-Made Man except that the latter grew up lower-class in economically stressful circumstances while the former grew up middle-class in comfortably stable surroundings.

The yuppie trope was at its strongest during the '80s and early '90s but is now becoming a Dead Horse Trope with the aging of the Baby Boomer demographic group. By the mid-to-late '10s, the concept of yuppies had evolved into Bourgeois Bohemians and Hipsters (who are similar but focus more on lifestyle than a career), as well as Tech Bros working for Silicon Valley corporations.

open/close all folders
Films
Literature
Live-Action TV
Music
Newspapers
If you've been reading the trend sections of your weekly newsmagazines, you know that "yuppies" are a new breed of serious, clean-cut, ambitious, career-oriented young person that probably resulted from all that atomic testing. They wear dark, natural-fiber, businesslike clothing even when nobody they know has died.
—"Yup the Establishment", Dave Barry's Greatest Hits
Professional Wrestling
Theatre
Western Animation
Feedback

Patrick Bateman is a high-ranking employee at Pierce & Pierce. He gets rich doing nothing but exercising his Conspicuous Consumption whenever he can, is almost identical to his scumbag co-workers and also happens to be a serial killer.

Patrick Bateman is a high-ranking employee at Pierce & Pierce. He gets rich doing nothing but exercising his Conspicuous Consumption whenever he can, is almost identical to his scumbag co-workers and also happens to be a serial killer.