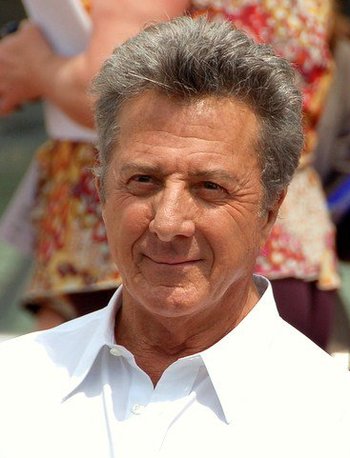 "When I told my parents I wanted to go into acting because I was flunking out of my first year of junior college, they were relieved that I had picked something other than joining the army."
Advertisement:

Dustin Lee Hoffman (born August 8, 1937) is an American actor, and a man who embodies the highest ideals of the acting art in North America. What's more, he did it by breaking all sorts of rules.

For one thing, when he first tried getting work, it was a 10 year struggle in the New York theater scene considering he was as un-movie star-like as you can get: short, big nosed and Jewish with the air of a shy introvert. However, perceptive directors like Mike Nichols realized what he could do; for example, in The Graduate in 1967, he took the world by storm with a powerful sincerity in his performance which took Method Acting to its height. Furthermore, he is credited for expanding the possibilities for different ethnicities to reach Hollywood stardom during the New Hollywood era as an actor who defied the stereotypes to hit it big his way.

Hoffman displayed a smart career sense when he chose the slimy disreputable hustler, Ratso in Midnight Cowboy, for his major follow up role. In doing so, he set the reputation of the actor who can play any role like a master. These included; a 121-year-old survivor of the Battle of the Little Bighorn in Little Big Man, a quiet intellectual who has to get tough in Sam Peckinpah's Straw Dogs, Lenny Bruce in Lenny, a sensitive father in Kramer vs. Kramer, an actor playing a woman in Tootsie, an autistic savant in Rain Man and the voice of a deeply complex red panda kung fu master in the Kung Fu Panda franchise among others. He won the Academy Award for Best Actor both for Rain Man and Kramer and won a voice acting Annie Award for Kung Fu Panda. In 2012, he had his directorial debut with Quartet.

He has a reputation for being difficult to work with (the old joke goes that you don't direct Dustin Hoffman, he directs himself), but this is tolerated because of the fact that his suggestions/demands are made by someone who cares about his work and they often help his films become better. It has, however, caused him to walk away from more than a few jobs (most famously Popeye, of all things), which was parodied by his character—an imperious acting coach—in Tootsie.

Even better, if you are cast with him in a film he cares about and Hoffman feels your acting is not good enough for him, cancel your free time because you're in for some tutoring from him. If all goes well, you'll end up doing the best performance of your career because of what he taught you (for example, take a look at Will Ferrell's performance in Stranger Than Fiction). For instance, the fact that Jack Black had some of his most acclaimed acting in Kung Fu Panda is no accident, considering Hoffman insisted on coaching him through each Action Film, Quiet Drama Scene.

Tropes associated with Dustin Hoffman and his characters include: