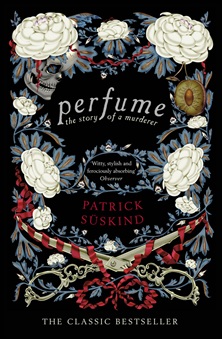 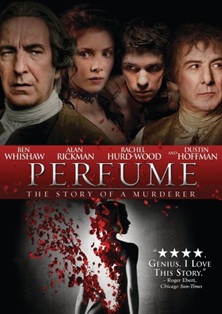 "The soul of beings is their scent."
— Jean-Baptiste Grenouille
Advertisement:

A 1985 Gothic novel by Patrick Süskind, Perfume: The Story of a Murderer (or Das Parfum. Die Geschichte eines Mörders in the original German) tells the story of Jean-Baptiste Grenouille, an orphan and a sociopath born into 18th century France. It turns out that Grenouille has an extraordinary sense of smell, but, curiously, he himself has no body odour.

Fittingly enough he becomes a perfumer, eagerly learning various methods to extract the smell from all kinds of things. It is then when he decides to create the most perfect perfume ever by capturing the scents of beautiful virgin girls, a fragrance so intoxicating that all who smell it will feel like they've gone to heaven. Of course, Grenouille has to keep this noble artistic vision a secret from society, as extracting a girl's scent requires killing her. (Clearly this story would have been much tamer if it were told in an era where tranquilisers were easily accessed.)

It was adapted into a 2006 film: Perfume: The Story of a Murderer, directed by Tom Tykwer, most known for his film Run Lola Run. The film stars Ben Whishaw as Grenouille; Dustin Hoffman as Baldini, the perfumer who teaches him the basics of the trade; Rachel Hurd-Wood as Laura Richis, an imperilled young lady in Grenouille's sights; and Alan Rickman as Antoine Richis, Laura's protective father. The film was a flop in America, but was actually a pretty big hit worldwide, and a certified blockbuster in Germany.

In 2018 a TV series was based on the book, but with the twist of being a contemporary crime thriller about a group of people potentially being inspired by the book and movie to try and make the Perfume Of Love.

The book and film Perfume provide examples of:

Alternative Title(s): Perfume The Story Of A Murderer