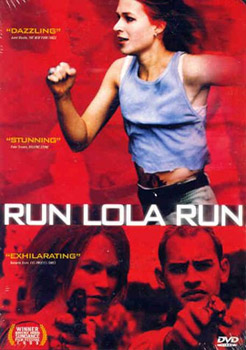 Lola rennt (known as Run Lola Run in English-speaking countries) is a 1998 German film directed by Tom Tykwer and starring Franka Potente and Moritz Bleibtreu. Unique and varied, the film is difficult to assign to any specific genre. Instead, think of this movie as a video game style exploration of love and fate that blends animation sequences with live footage, except that it's techno, fast, and features a red-haired German woman who spends most of the movie running.

After his girlfriend Lola's scooter is stolen, Manni, a courier for a crime boss, accidentally leaves 100,000 Deutschmarks on the subway, where it's stolen by a homeless man. He's dead if he doesn't bring it in, so he decides to rob a grocery store in order to make up for the loss. He helpfully informs Lola of this 20 minutes beforehand. Lola, whose father is a wealthy banker, decides to see if she can get Manni's money for him.

The film is perhaps most famous for its video game parallels: several times throughout the movie, either Lola or Manni suddenly die and the story starts over, with Lola making subtly different decisions this time around that greatly affect the outcome.