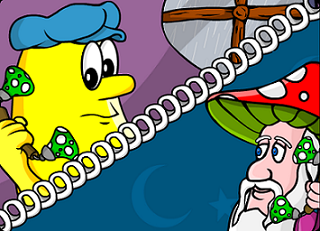 Summary: Both people on a phone call are shown simultaneously.

Split Screen is one of those camera tricks that were never really popular... except for depicting people calling each other on the telephone, that is.

A common cartoon gag with this is where the shouting character's portion of screen expands and/or the timid character's portion shrinks. Very useful when the tide of the argument shifts, moving that diagonal back and forth showing who's in charge. It's also common for cartoon characters to reach across the screen split and directly interact with the person on the other end of the line. It is sometimes parodied when the split is removed and it is revealed that the characters are actually next to each other.

Even though there is nothing inherently comedic about this trick (and, when applied wisely, it can be a useful tool to portray two characters in an equal position with only the viewer deciding who to focus attention on, something not quite common outside of the theater. Plus, it eliminates the need for Repeating So the Audience Can Hear), it's rather hard to come by in any non-animated fiction that tries to take itself seriously.

It can extend to more than just two screens, thanks to things like three-way calling and call waiting.

Despite her name, Miss Sunshine is not really that bright.

Despite her name, Miss Sunshine is not really that bright.