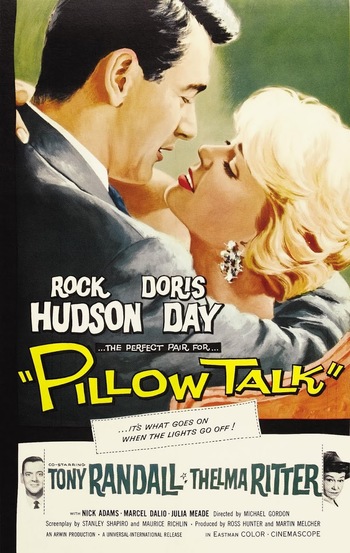 Brad Allen: Look, I don't know what's bothering you, but don't take your bedroom problems out on me.
Jan Morrow: I have no bedroom problems; there's nothing in my bedroom that bothers me.
Brad Allen: Oh, well, that's too bad.
Advertisement:

Pillow Talk is a 1959 romantic comedy film directed by Michael Gordon (you've heard of his grandson, Joseph Gordon-Levitt). It was the first of three films to pair Doris Day with Rock Hudson; also in the cast are Tony Randall and Thelma Ritter.

The plot concerns Jan Morrow (Day), a career woman, and Brad Allen (Hudson), a playboy songwriter. Much to her chagrin, her telephone line is connected to his through a party line, and his multiple romances make it near impossible for her to make a decent work-related call. When he meets her in person, he disguises his voice and adopts the name Rex Stetson. The charade works, since she's never seen him, but can it last?

A huge commercial and critical success when it came out (earning five Academy Award nominations, and winning for Best Original Screenplay), Pillow Talk is often considered the Trope Codifier for the Romantic Comedy all the way up to today, solidifying many of the staples of the genre throughout the years: a serious career gal who's too busy for love, a dashing playboy who falls in love with one of his attempted conquests, a masquerade made to deceive a love interest, Belligerent Sexual Tension, slapstick comedy, Double Entendre up the ying-yang, etc etc. For many scholars of the genre, this is the Romantic Comedy.

Down with Love (2003) is an Affectionate Parody of this film and the tropes it popularized, complete with having Tony Randall in it (in his final film role).