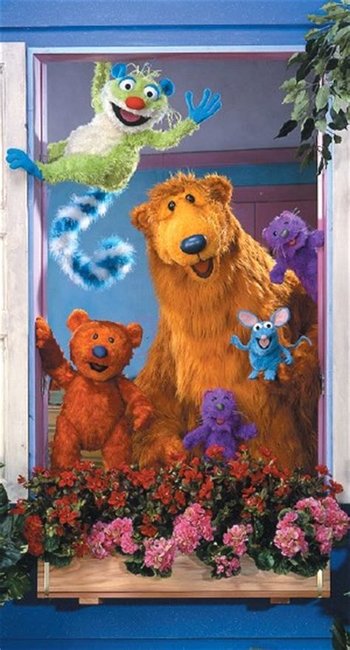 Door is open, come on in! Now you're here, so let's begin!

Welcome, welcome, welcome to the page for Bear in the Big Blue House! It's the program that proves that maybe, just maybe, everything isn't worse with bears, at TV Tropes!

First airing in October 1997, Bear in the Big Blue House was part of a group of programs that ushered in a new era for Playhouse Disney. In each episode, the titular character would invite viewers into his home, the cozy Big Blue House, for a day of fun and learning with his young friends Tutter Mouse, Ojo the bear cub, Treelo the lemur and Pip & Pop the twin otters. Together, they learn about the world around them and their places in it — everything from how to share with others to toilet-training. As they grew, the series likewise opened up, taking viewers into the wider Woodland Valley in which the characters lived.

Bear in the Big Blue House was a Muppet show, a production of the Jim Henson Company. It aired for four seasons on Playhouse Disney; the final season featuring a vastly expanded set and an additional cast of characters. The program's final episodes were not aired in the United States until April 2006, well over three years after the previous original airings, though they had long been airing in non-U.S. markets. Reruns of the show continued to air until May 2007. Though no longer seen on Playhouse Disney in the United States, numerous DVD and videocassette releases are available for the program.

Wiki-wise, the show is covered at the Muppet Wiki

, which features detailed information about the series and a detailed episode guide. The program is also covered in a number of articles at the wiki's sister site, Tough Pigs, including My Week with Bear

, My Week with More Christmas

, My Week with Muppet Breakfast

and the Tough Pigs Maturity Test

Everybody in the Tub

Source of the page quote - Bear and the kids of the Big Blue House take a bath while singing about how much fun it is to take one and how good it makes them feel.

Example of:
Baths Are Fun

Everybody in the Tub

Source of the page quote - Bear and the kids of the Big Blue House take a bath while singing about how much fun it is to take one and how good it makes them feel.