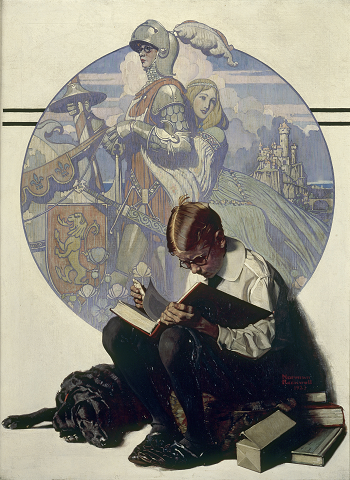 "Having fun isn't hard when you've got a library card!"note Boy Reading Adventure Story by Norman Rockwell
"I love this book. I... I love reading!"
— Rainbow Dash, My Little Pony: Friendship Is Magic, "Read It and Weep"
Advertisement:

A common PSA type plot and Aesop for kids' shows and movies. There's a few possible plots that lead to this:

Usually the new reader(s) have to overcome Anti-Intellectualism and other prejudices in themselves and others. Frequently these episodes include a rainy day and power outage to force the kids to read, or have them sick and needing a lot of bed rest. The children who learn this aesop usually decide that, even though the weather is better and/or they aren't sick anymore they'll continue to read. May overlap with Separate Scene Storytelling. If this trope is paired with New Media Are Evil the message tends to boil down to "put down your mind-numbing handheld device and read a mind-opening book". Anviliciousness optional.

It's worth noting that a show can be just as likely to promote the opposite Aesop, that too much reading can be just as bad as too little, and encourage kids to go out and play or make friends. The idea of reading as being good for you is actually a fairly new concept that came with the advent of television. Prior to that, recreational reading was viewed in pretty much the same sense as watching television is today. For instance, the books of the Stratemeyer Syndicate like The Hardy Boys and Nancy Drew series were regarded as worthless garbage in the 1920s and 1930s that ruined kids' appreciation of the classics. Of course, by the time the properties' most successful adaptation, The Hardy Boys/Nancy Drew Mysteries, came out in The '70s, it was greeted by some parents with some hope that their kids watching it might like to read the novels next.

Oddly enough, the trope is usually limited to novels, and ignores the value of reading across other media, such as magazines, comic books, manga, novellas, articles, short stories or non-fiction books. And not to mention, reading in digital formats such as e-books and apps for tablets and phones. For that matter, it has largely not been discussed in popular entertainment whether listening to an Audio Adaptation of a book of literature counts as "reading," but considering the audiobook medium is a consistently growing sector of the otherwise struggling book market, expect that subject to come up.

It also doesn't help that, if done poorly, it can suggest that all books are "classics", or just very long. For example, the reluctant reader is presented with a "classic" book (which they will inevitably learn to love), rather than a more modern work (e.g Harry Potter). As the language used in classic books tends to be alien to a new reader, and the stereotype that classic books are snobby and dull, it can have the wrong effect. Unfortunately, classics tend to be in the Public Domain and, therefore, require jumping through fewer legal hoops to work with. Another option would be to have a fictional work within the story.

And in this day and age where written media is distributed digitally, expect Aesops about reading a physical book. If it's saying that the screen-based entertainment is inferior to books, see Books vs. Screens.