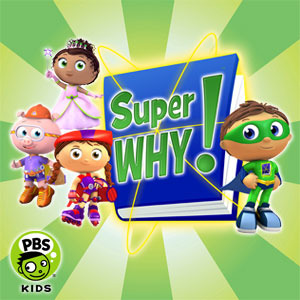 Super Why! is a Canadian-American educational animated children's show aimed at preschool aged children. It features Fairy Tale characters who turn into superheroes known as the "Super Readers", who can literally enter into books to help solve problems. They are:

The show is also interactive in that the viewer is also assumed to part of the group, as the unseen Super You, "with the Power to Help!" whom the other heroes address directly.

The show is produced by Decode Entertainment (later DHX Media) and 9 Story Media Group's New York-based Out of the Blue Enterprises. It features many of the same people who made Blue's Clues on production, being the creation of one of that show's co-creators Angela C. Santomero. Episodes can be seen on PBS Kids in the United States and CBC Kids in Canada.

The series is highly formulaic, following the same pattern in virtually every episode: One of the main characters has a problem, and the group sets out to find a solution to it by changing into their heroic selves and entering a book. There they try to help the story's characters with their problems, eventually changing the story (by replacing words in the text) to give it a different ending. In the process, they find special "super letters" that Super Why collects in his "super duper computer" which eventually spell out a word that is the solution to the original problem. After that too is resolved, the Super Readers, now back in their normal forms, dance a little victory dance to the show's tune, and the episode ends.

It should be noted that not all the books the kids enter are the typical fairy tales most children know; some are from other countries (such as the Japanese fairy tale of Momotarō, the Peach Boy), others are folk tales instead (such as Juan Bobo and the Pig, a Puerto Rican folk tale) and some are modern books such as Doctor Dolittle. The stories are usually changed to make them simpler and safer for a very young audience. While the Super Readers are animated in 3D, the storybook characters are all two-dimensional, resembling the type of pictures you see in such books.

Each episode begins with a live-action segment before the cartoon fully starts.

Each episode begins with a live-action segment before the cartoon fully starts.