Throw the Book at Them 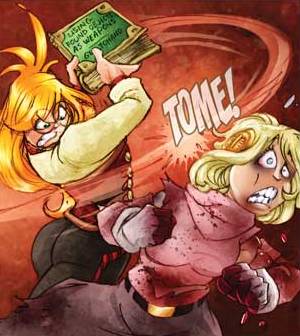 Using Using Found Objects as Weapons as a Weapon
"They used to call me 'Biblethumper'. Then I realized the Bible is an excellent book to thump with."
— Old preacher joke
Advertisement:

Also an alternative melee Weapon of Choice for the Squishy Wizard, White Mage, Black Mage, and other magical or scholarly types if the writer decides that a Simple Staff is too fearsome. After all, what better way to make the hapless wizard even more hapless at close-range than to have them trying to kill the slathering, three-headed, pointy-clawed, saber-toothed, flaming beast of hell by whacking it repeatedly with a leather-bound tome?

Often, this will be prompted by a character saying, "Sticks and stones will break my bones, but words will never hurt me," or something of the sort. For additional humor value, the book that's used as a weapon will often have a title that's thematically appropriate to the user, the target, and/or the situation at hand. Bonus points if it's being used by a Badass Bookworm, established or developing.

A Sub-Trope of Improbable Weapon User. Related to Useful Book. See Bookshelf Dominoes, for when bookshelves are a weapon. If the book is only used to show the character's angry, see Book Snap. A softer version of Throw a Barrel at It.

Note that this is for books being used to physically attack. For books used offensively by casting spells from it, see Spell Book; although the two can overlap if you physically bonk people with a spellbook. For the paper of books being used as a supernatural weapon, see Paper Master. For books with dangerous words in them, see Brown Note or Deadly Book. For the other meaning of "throw the book at them",note Which means "Prosecute to the fullest extent of the law" see the courtroom tropes on the Crime and Punishment Tropes page; it's been known to overlap, especially in comedies and especially when a Joker Jury is involved.