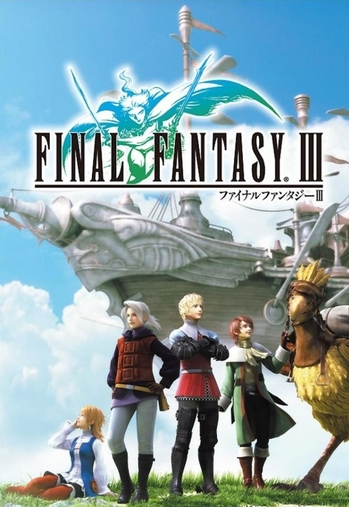 Four souls shall be blessed with light, and so it shall begin...

The third entry in the brain-freezingly popular Final Fantasy series. It was originally released for the Famicom in 1990.

Kids will be kids, right? And if you tell them that a particular abandoned and unguarded cave is dangerous, you can pretty much expect the kids to wander in. This goes double if the kids in question are a ragtag group of adventurous orphans.

Little do the orphans know, they're about to stumble on a power which will change their lives. With the crystals of light sensing that darkness is about to take over, they bestow their powers onto the four. It's now up to these kids, so inexperienced that they're called Onion Knights (after the Japanese term negibozu, literally a green onion sprout but also meaning a callow youth), to save the world.

Similar to II, your party consists of 4 nondescript characters who can become whatever you want them to be. By far the biggest innovation in III lies in the Job System, which builds on what Dragon Quest III rolled out two years earlier. Although Final Fantasy has character and prestige classes, it does not feature an interchangeable system like this game does. You can move all of your Onion Knights into any job at any time, albeit for the right amount of Capacity Points (won by fighting battles and spent whenever you change jobs). III's Job system set the framework for V, X-2, and Ivalice Alliance.

For a long time this game was considered one of the 'lost' Final Fantasy games, as it was not released outside of Japan for many years; after II and V were finally released in English (in 2003 and 1999, respectively), III stood as the last Japan-only mainline entry. In 2006, it was finally remade for the Nintendo DS, with more plot and characterization, thus exposing the game to a wider audience. The DS remake was again tweaked to improve some gameplay issues and has been ported to the iOS, Android, and PSP, as well as PC via Steam. In 2021, a Truer to the Text remaster of the original Famicom game was released on IOS and Steam as part of the Final Fantasy Pixel Remaster line, making it the first time that version has been translated into English.

It's certainly one of the most formative games in the series, with the Job System, Moogles, Summon Magic, Gysahl and the Fat Chocobo, and terrain effects (this is relevant to the Geomancer job) all finding their origins in this installment.

Hey, where are you four brats off to now? What...? You're going to go save the world? Did you get hit on the head or something?